Star Ferry Musing #66:  The Peaks of the Yellow Mountain

Eight years ago, Sally and I took a tip to the fabled HuangShan (黃山, Yellow Mountain).  We milled around surrounding cities for a few days to wait out the rainy weather until the sky cleared up.  Since the sceneries of the mountain are eternal, I am sending these 8-years old pictures to you for your enjoyment.

The way up the mountain was made easy by a sky tram.  It flew over mountain-sides, valleys, and forests, taking tourists up thousands of feet to the spectacular peaks. 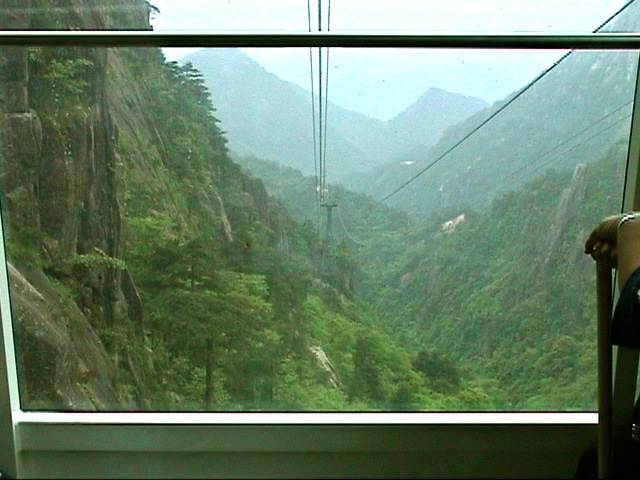 But the tramway did not replace hard labor of the traditional porters.  Each porter was loaded with over a hundred pounds of food, construction material, garbage, or hotel linens; and walked up thousands of feet to the peaks.  To ease their labor, each porter used a support pole in addition to the bamboo carry pole.  After a few dozen steps up or down, the porter would stop to rest, resting the heavy load on the vertical support pole.  This placement eased the lifting the load for another few dozens of steps.  Each man was able to make two or three round trips a day, and earn a paltry few dollars.

The existence of this hard labor bothered me.  Why did the tourists have to sleep in a hotel at the peak?  Why did the porters have to carry such inhumanely heavy loads?  Why were they paid so low?  How long could a porter work like this before he is worn out? 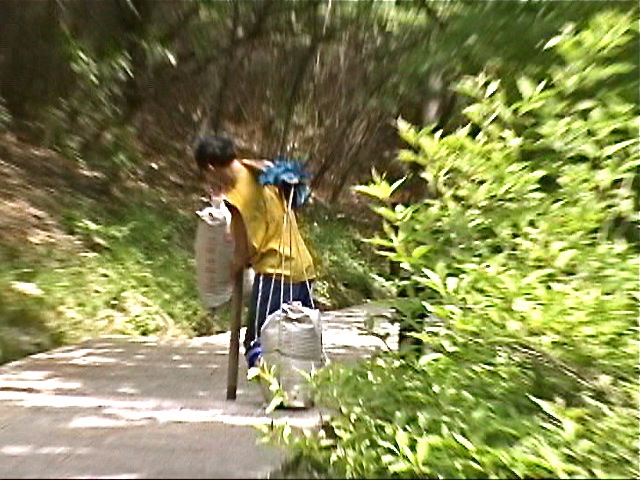 True to their reputation, HuangShan cliffs were spectacular.  They rose thousands of feet straight up, and observation points were precipitously close to the edge.  Sally hanged onto the stone posts as she leaned gingerly over the chain to look down the abyss. 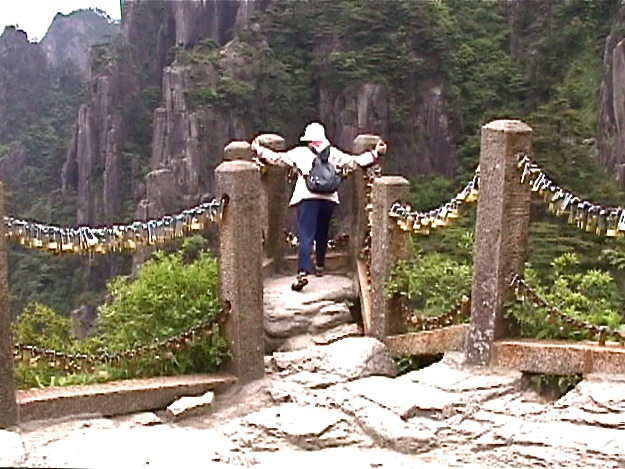 The steep drop gave Sally the willies.  She overcame her vertigo and looked down the cliff as her knees nearly buckled under her.

One way the vendors on this mountain made money was to sell locks.  Chinese couples would clamp their locks onto the chain, threw the keys down the mountain, and wished their love would be as secure as the locks.  We did not follow the fad, yet we are still married after 43 years. 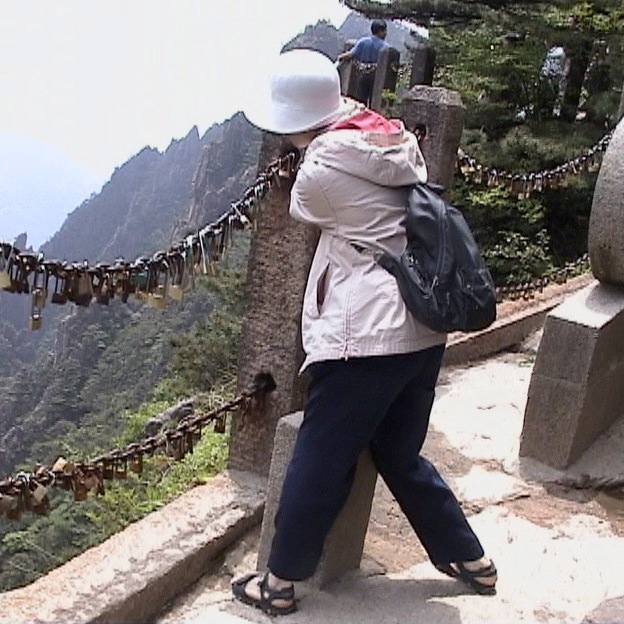 The mountain cliff that gave Sally the jitters was as high and steep as this piece of rock. 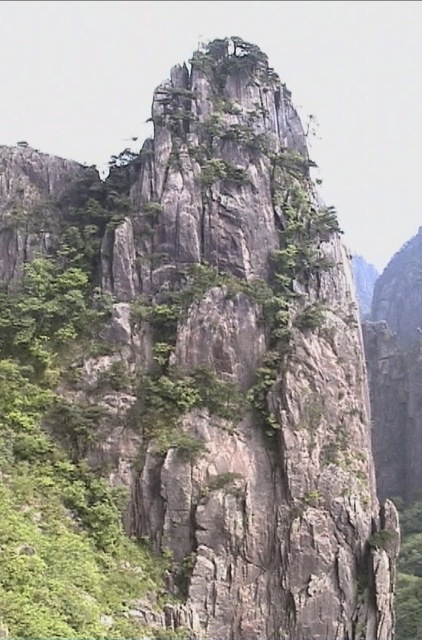 I also went out on the observation point to look down into the abyss. 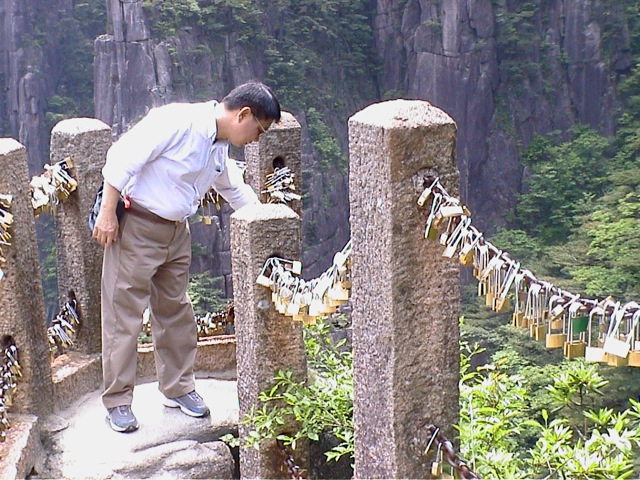 Being afraid of heights, my stomach churned. 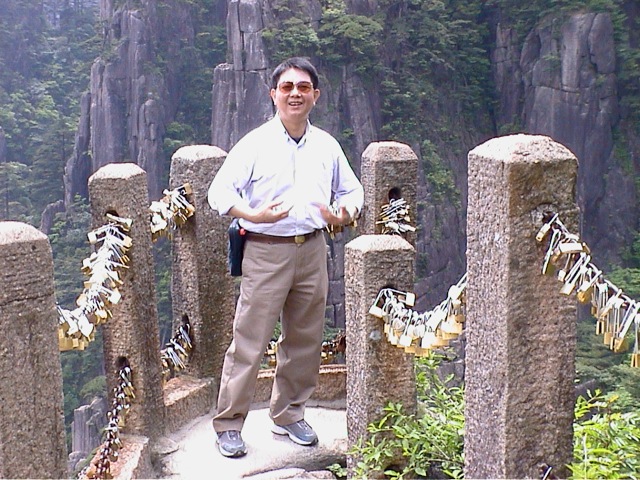 Tourists walked up the tree line on the peak across a deep valley.  Their view was as nerve wreaking as ours. 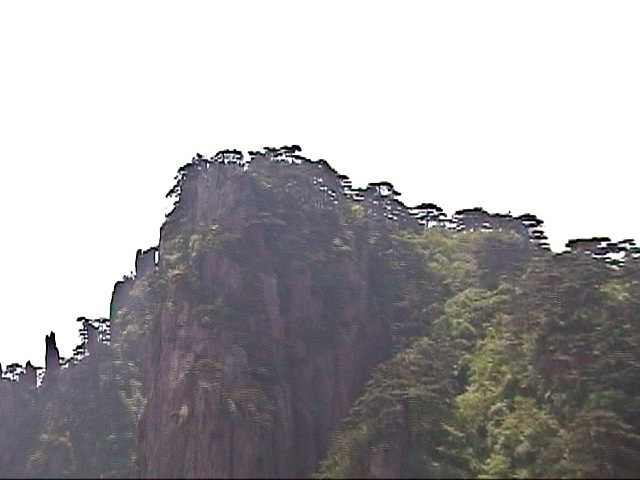 HuangShan was covered with HuangShan pines (黃山松, Pinus hwangshanensis).  These pine trees thrived among the rocks and gravels of the mountain, and they have beautiful shapes and needles.  Without them, HuangShan would lose a great deal of its rugged beauty. 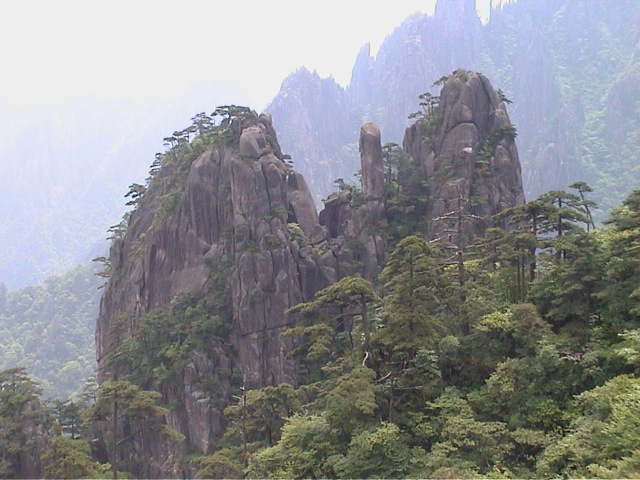 One observation point was an outcropped rock with concrete banister built to its very edge. 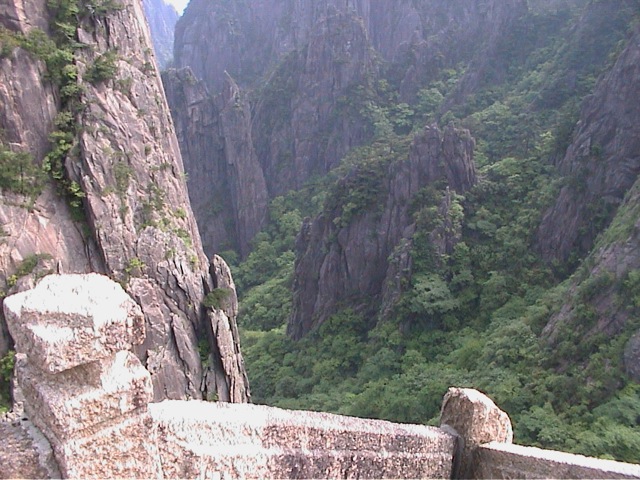 Sally gingerly climbed down the rock’s steps, then hanged on to the banister for dear life, and took one gut-wrenching look. 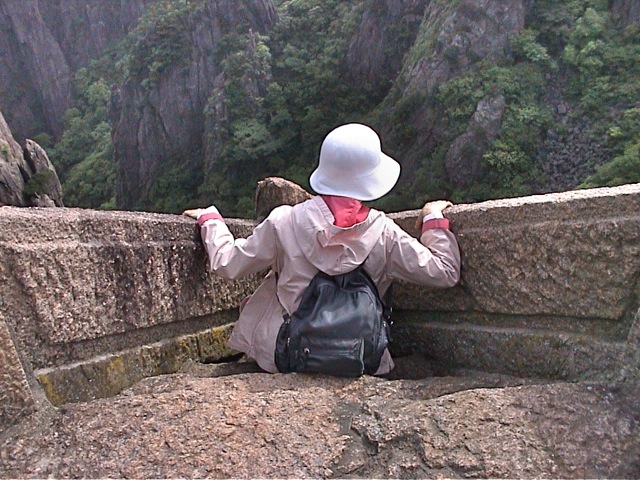 After hours of climbing up and down steps, we sat and had some refreshments. 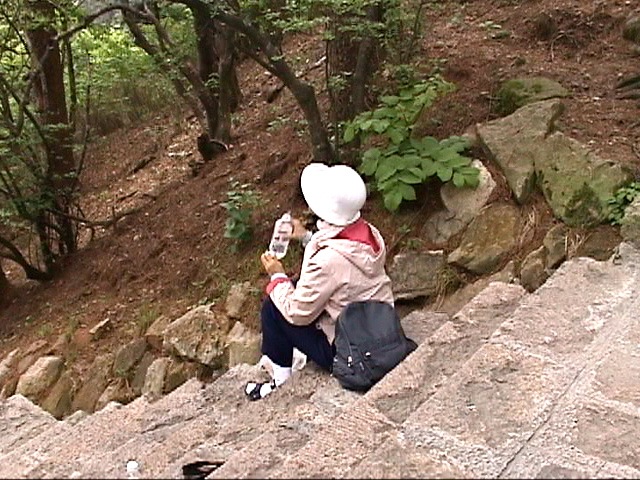 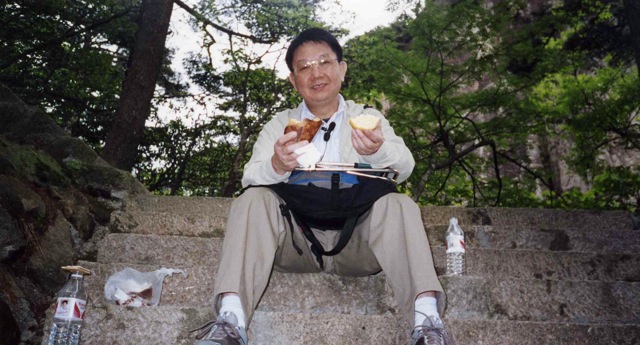 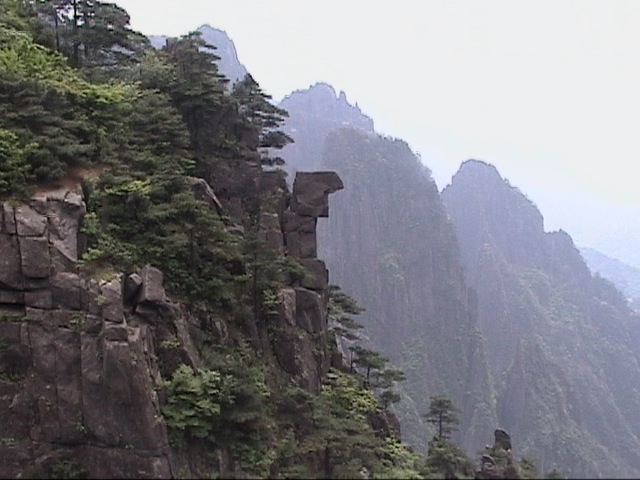 One well known sight on HuangShan was the pine tree that grew at the tip of a slender rocky finger, poetically named 夢筆生花 (Flowers from dreamy brush).  Tourists flocked to take picture of this famous pine tree.  What they didn’t realize was they were taking picture of a fake tree.  The real pine died and the authorities grafted a plastic tree to keep the tourist satisfied. 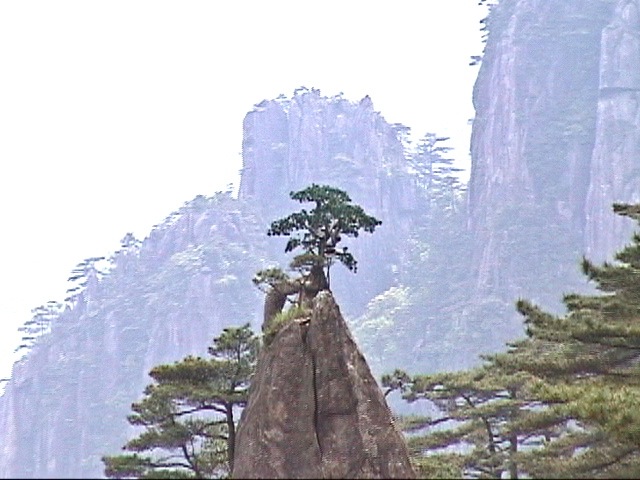 A grand hotel was being built on the peak of HuangShan.  I wondered how many porters were worn out hauling up the tons of building material. 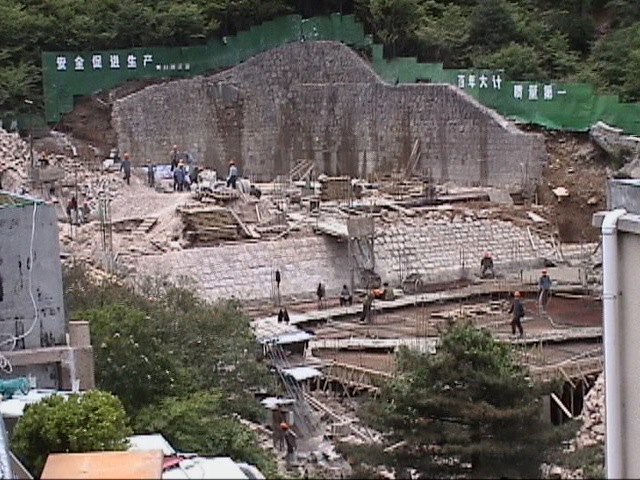 Below the peak, a pavilion was built with a bronze bell.  For a small fee, Sally swung the knocker to ring out well wishes. 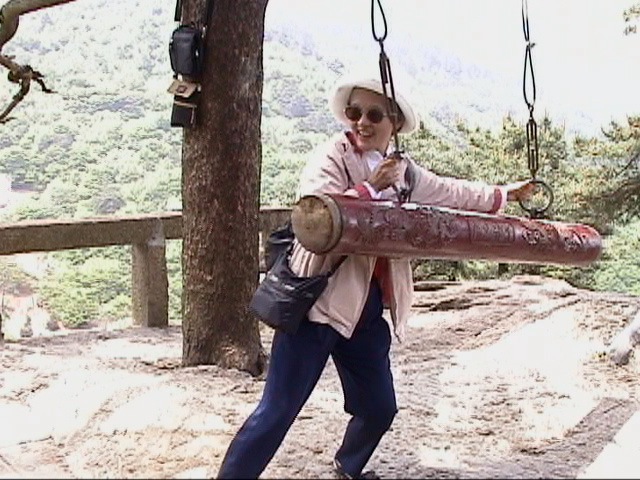 We also visited the traditional gardens of SuZhou (蘇州) on this trip.  A few well placed stones duplicated our vision of HuangShan in miniature. 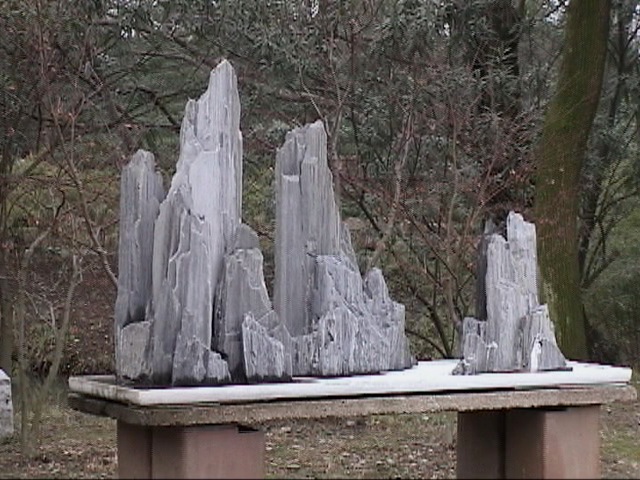 A bonsai of trees and rocks again rekindled our memories of HuangShan. 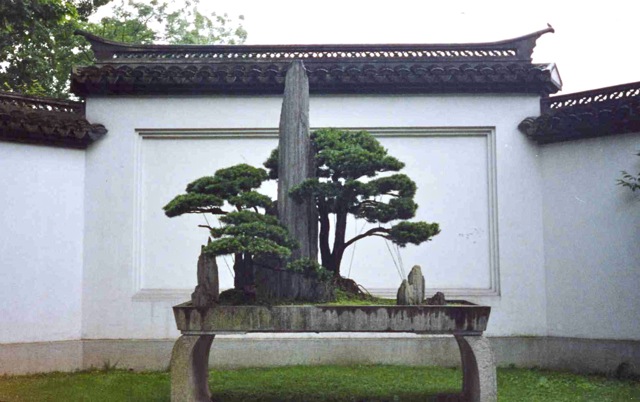 The classical garden The Humble Administrator’s Garden (拙政園) in SuZhou was made with the best materials.  This intricately carved window frame was made of a precious red wood, suan zhi (酸枝).

SuZhou is famous for its silks.  We visited a silk shop and saw these silk worms fatten themselves eating mulberry leaves. 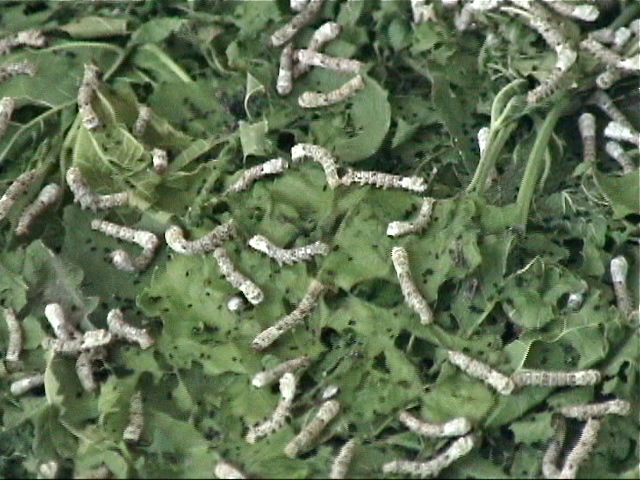 When we visited the West Lake (西湖) in HangZhou (杭州), I sat on our lightweight aluminum stool by the lake shore to contemplate. 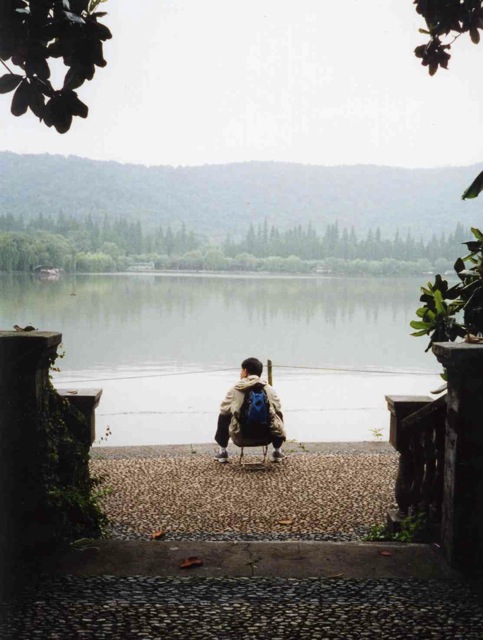 I had been to the West Lake before and found it plain, overrated, and not particularly attractive.  This time, we went to the northwestern corner of the lake and found the sights that made the Lake famous.  The place was named 曲院風荷 (Winding Halls and Windy Lotuses).  It was a rainy day, and we were the lone visitors on the islands by the lakeshore.  Rain drops hit the leaves and the water, the dark sky made the garden paths mysterious, and compelled us to talk in hushed voices. 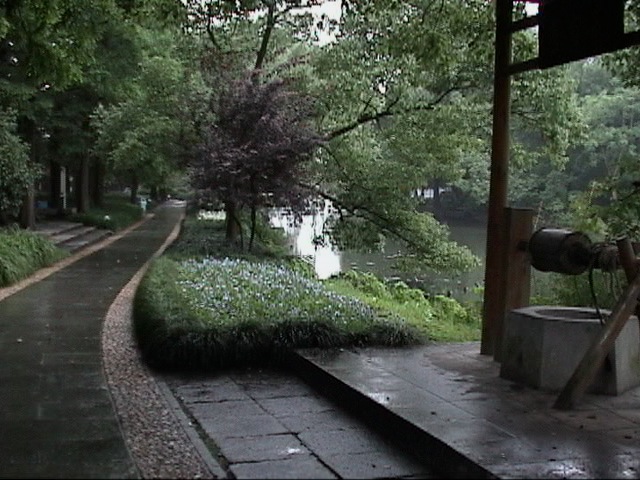 Every turn of the path gave us new vistas.  This lonely pavilion sat by the water across a pond. 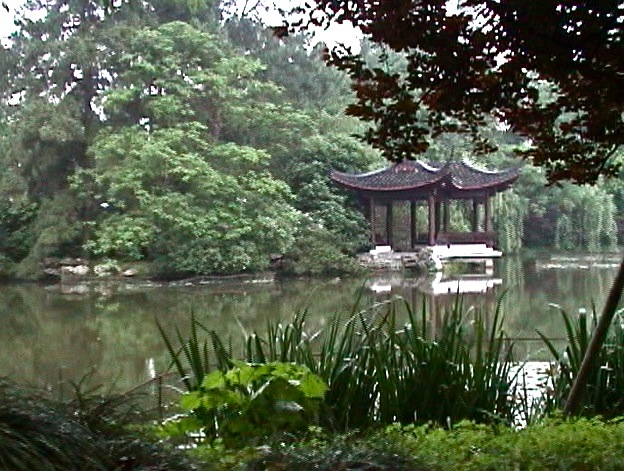 A panorama of the pond by the paths was the essence of tranquility.  This was the West Lake of our dream.

In a corner of the lake, a white peacock tried to entice two peahens.  If both happened to become attracted to him, he would have a different kind of problems. 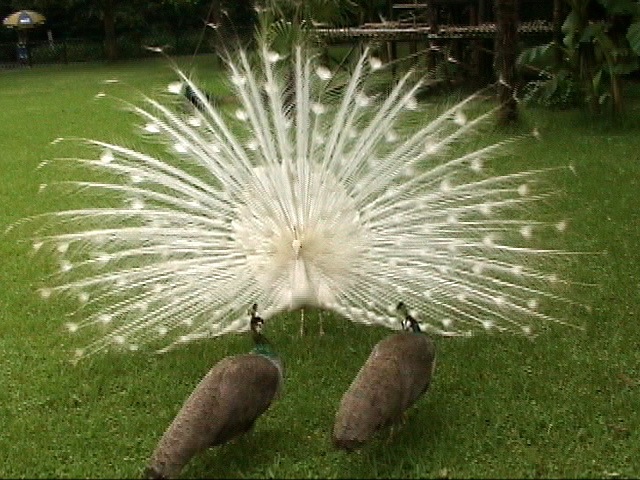 We also visited the canal village of ZhouZhuang (周莊).  These two stone bridges, one squarish and the other arched, were made famous by a painter.

This town is famous for its braised pork hocks (萬三蹄).  They were sold in vacuum packs for tourist to bring home. 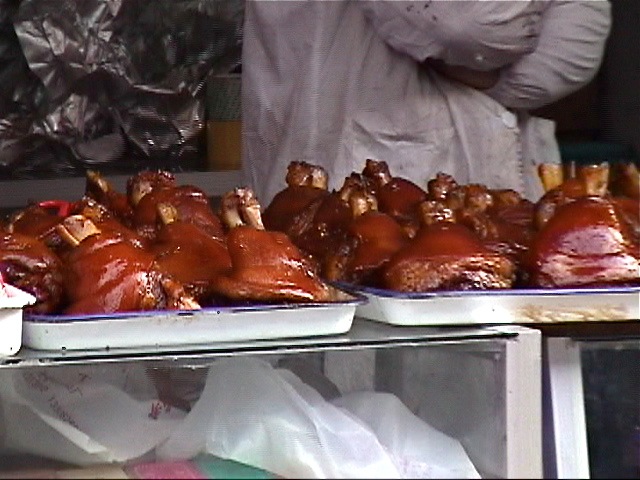 We ate lunch in a very small building by a canal.  Our table occupied one small room overlooking the canal.  The atmosphere of the venue alone was worth the cost of the meal. 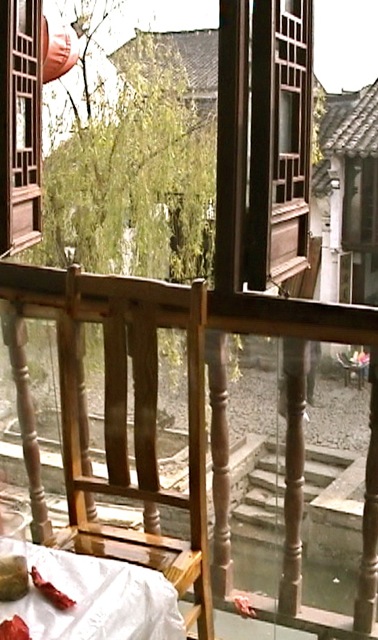 We ordered the braised pork hock.  Sally enjoyed the well-flavored pork as one of the best she ever ate.  We finished the whole hock. 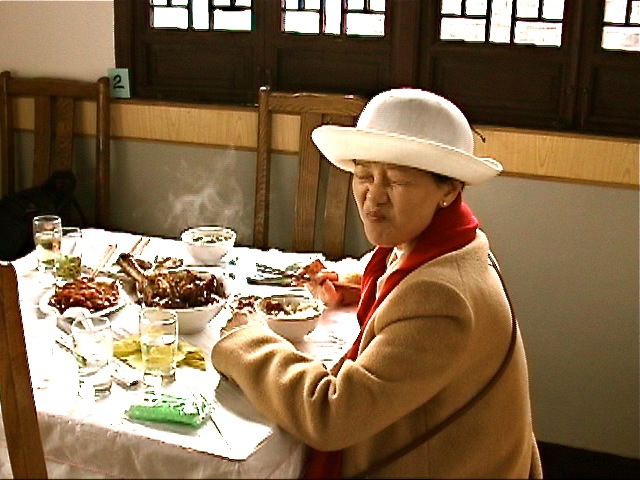 2 thoughts on “SFM #66: China. The Peaks of Yellow Mountain”