Sally and I have always been fascinated by Pompeii, the Roman city destroyed by the erupting Mount Vesuvius in 79CE.  Pompeii was a seaside resort town of 20,000 when it was suddenly buried by 20 feet of volcanic ash and pumice.  Pompeii was suddenly frozen in time and its daily life was sealed for 1,700 years.

When Pompeii began to be excavated in 1748, it was found to be a well preserved time capsule of Roman everyday life.  Unlike other archeological sites where only disjointed ruins are found, Pompeii was a complete city with frescos on walls, household items in homes, and even carbonized bread in ovens.  For the last 270 years, Pompeii has been a popular attraction to millions of tourists.

The city of Pompeii has been largely recovered by generations of archeologists.  About 1/4 of the city remains buried, and is shown in blue in the map below.  Pompeii city encompassed 163 acres, or approximately 2,300 feet by 3,000 feet.  When we visited Pompeii, we entered through the gate on the west side, viewed official buildings in the open square, and then roamed around the maze of streets.  Our visit covered only the western 1/3 of the ruins.  We did not visit the oval amphitheater nor the rectangular wrestling school on the eastern end of Pompeii.

This entrance ramp through the city gate was covered with large slabs of stone. 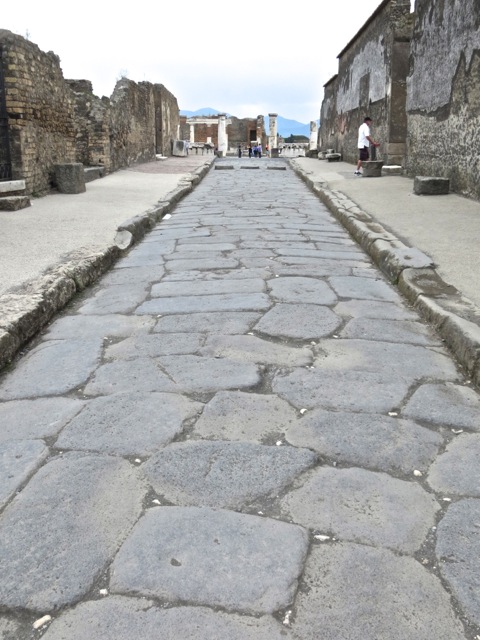 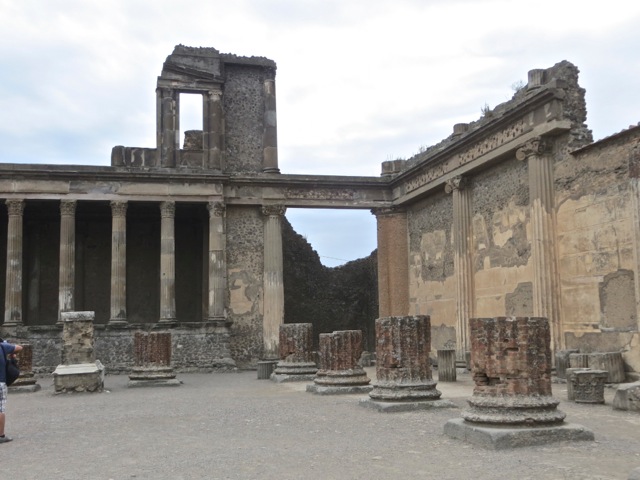 Romans were accomplished hydraulic engineers.  They channeled water by gravity from mountains to their cities via conduits and aqueducts into water towers above the cities.  Then water was fed under pressure by sealed lead and ceramic pipes to homes, fountains, and bath houses.  This was truly an exceptional feat of engineering accomplished 2,000 years ago.

These photos from the web show a few lead pipes still in situ in Pompeii.  Roman plumbers connected these lead pipes with flared joints, soldering the parts with molten lead into water tight seams.

This public fountain provided fresh water to the citizens. 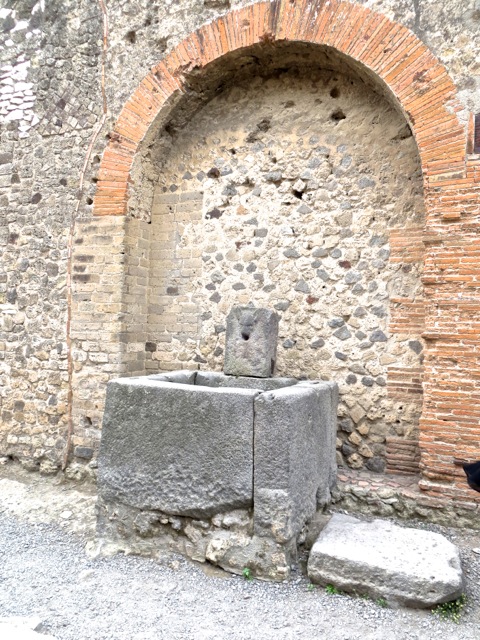 The rich flaunted their wealth by building elaborate fountains in their homes and have water piped into their homes.  This beautiful fountain has a water stairs to cascade water down its steps.  We did not see this fountain in person. 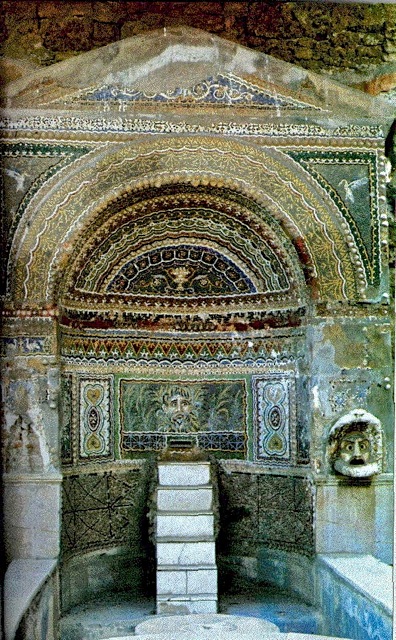 Many houses in Pompeii were multi-storied.  Residents living in upper floors had kitchen sinks and indoor toilets. 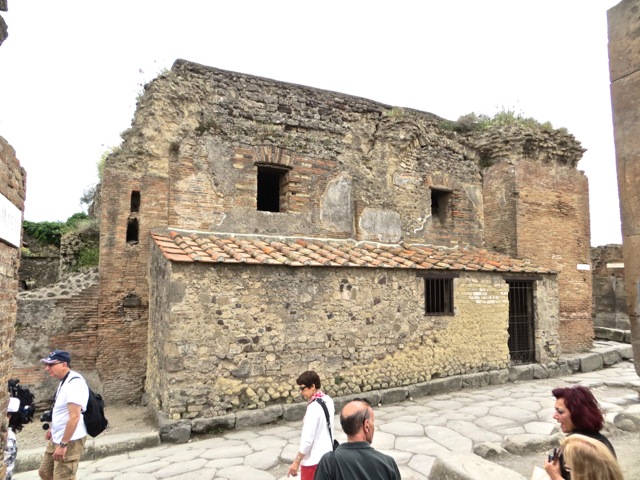 This embedded ceramic pipe may have carried either toilet waste into the sewer or rainwater from the roof into underground storage tanks.  I am not sure. 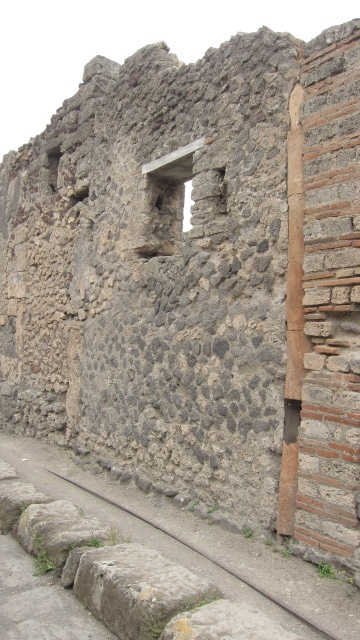 As city streets carried water runoff as well as some sewage, pedestrians walk on sidewalks above the street level.  To cross the streets, they used stepping stones to avoid the dirty water.  Wagon wheels could roll past the stepping stones. 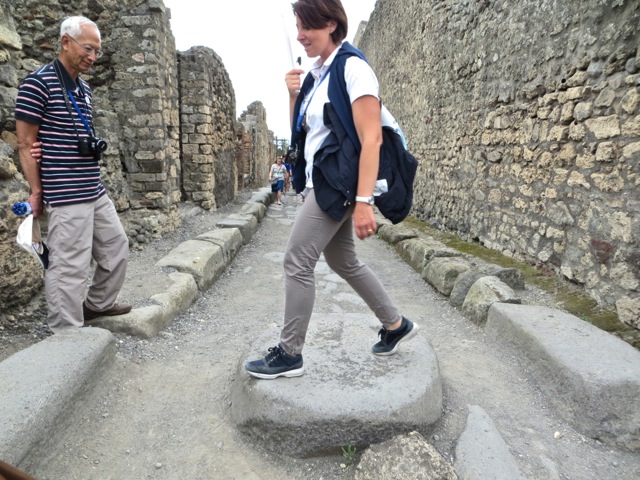 We saw a cross sign on a wall but it was probably not a Christian church but just a decoration. 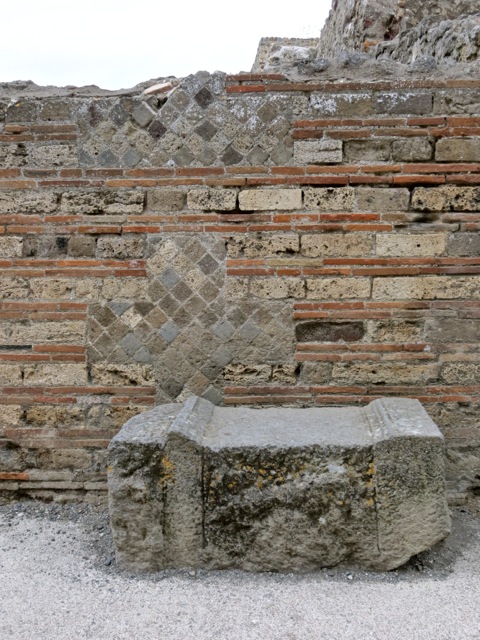 This wall was built with shaped stones, cemented in mortar, and surfaced with stucco.  It is still in pretty good condition after 2,000 years.  Romans built everything to last.

This hole in a curb stone was probably used for hitching a horse. 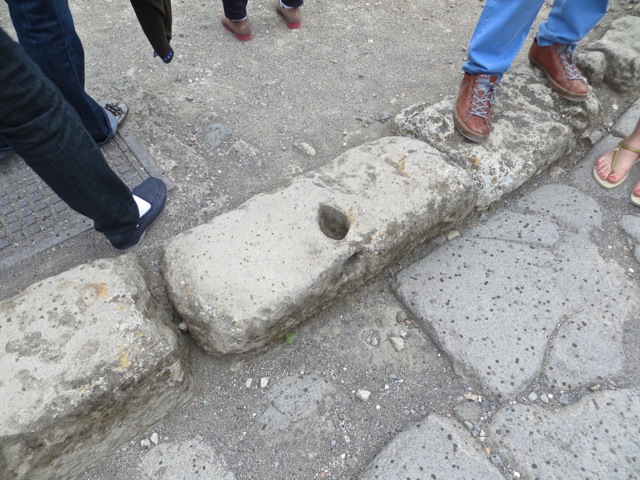 I enjoyed the tour guide’s talk. 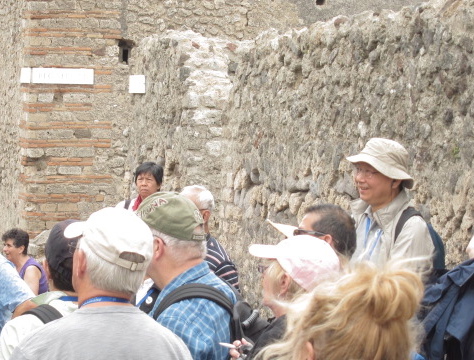 This mosaic floor was surfaced with millions of shaped stones, painstakingly installed by skillful workers. 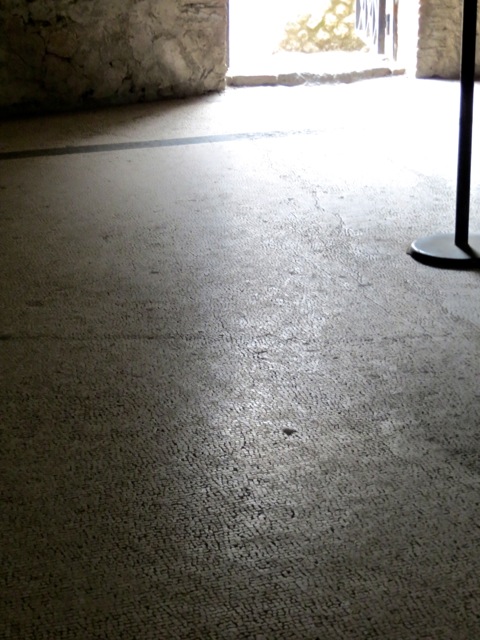 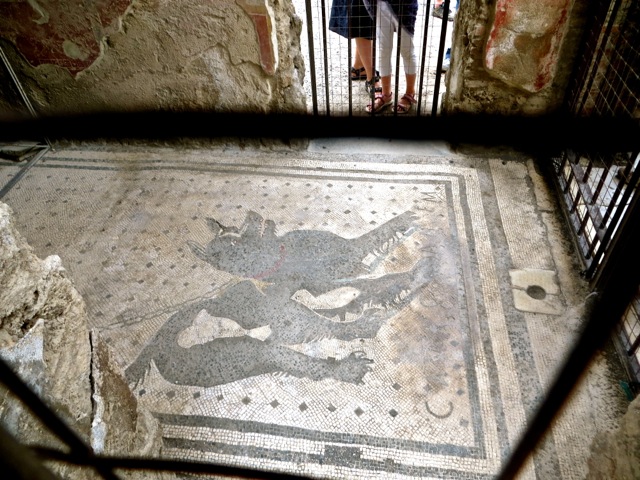 This veranda of a house is still inviting. 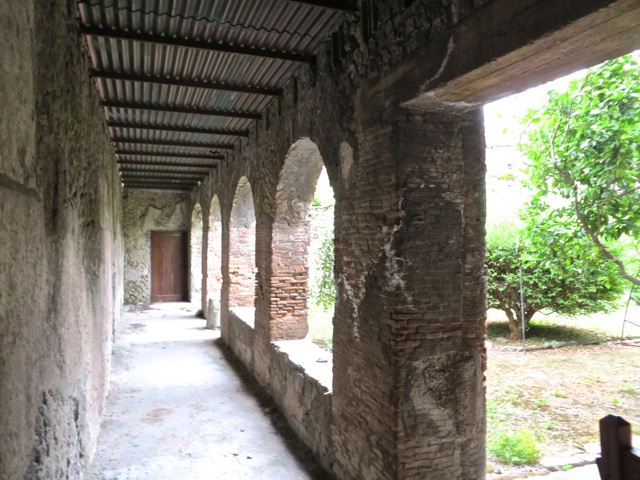 Pompeii was a city crowded with solid houses. 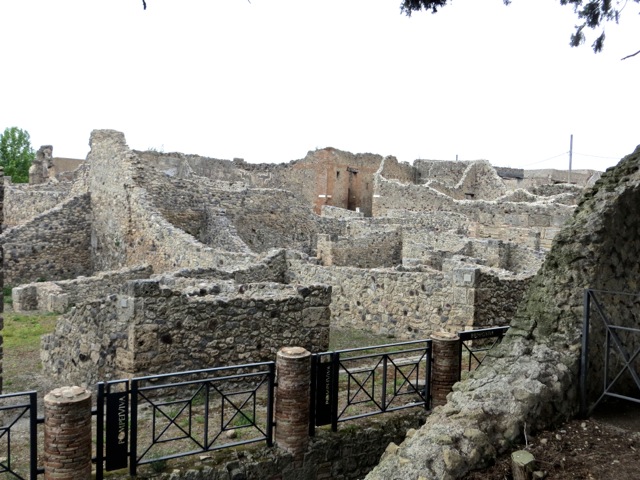 This bar sold wines, bread and other foods.  I could almost hear the din of chatter by its long-gone patrons. 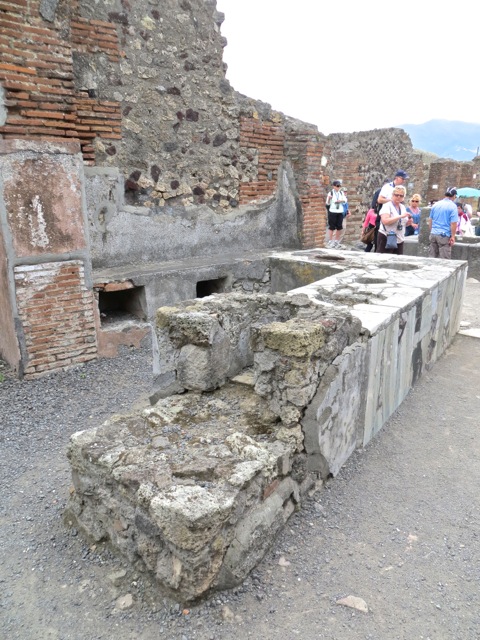 In this shop, a stone mill sat on a conical base.  Grains were poured into the opening on top, pulverized and emerged as flour.  The fresh flour was used to make dough, baked in the brick oven into bread.  Carbonized loafs of bread were found in such ovens by archeologists 1,700 years later.  They passed way beyond their expiration dates. 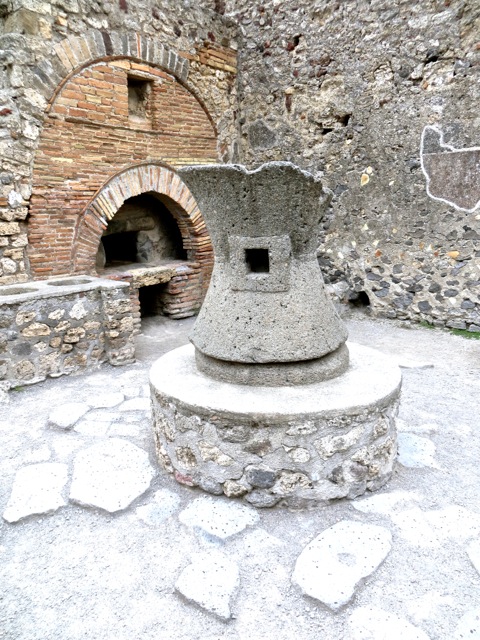 Shops can be distinguished from homes by the telltale slot on their threshold.  The slot was used to anchor wooden panels to close the store front at night. 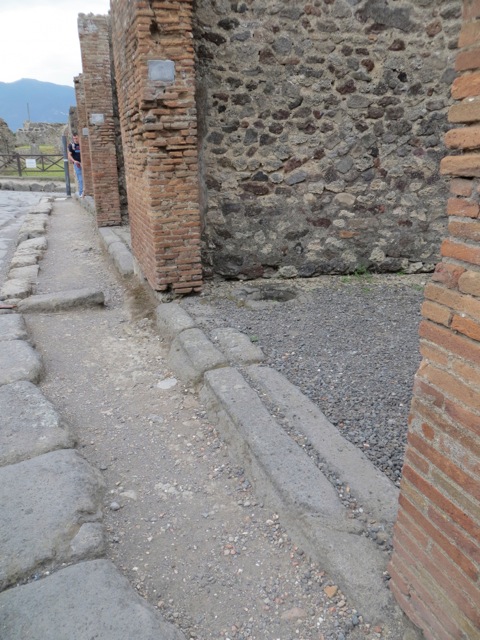 Romans love to bathe.  This public bath was open to all citizens who would bathe and relax in its luxury. 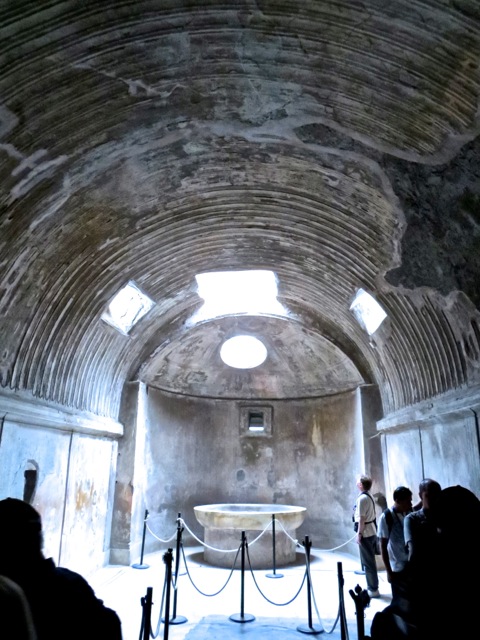 Steam would condense on the ceiling.  The curved ceiling led the condensate down into the trough at its base, and then flowed out of the room.  This kept the condensate from dripping onto the bathers. 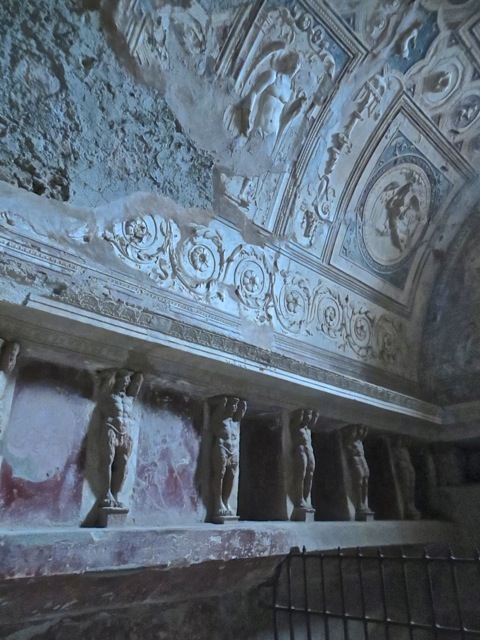 This ornate massage couch must have heard many moans and groans. 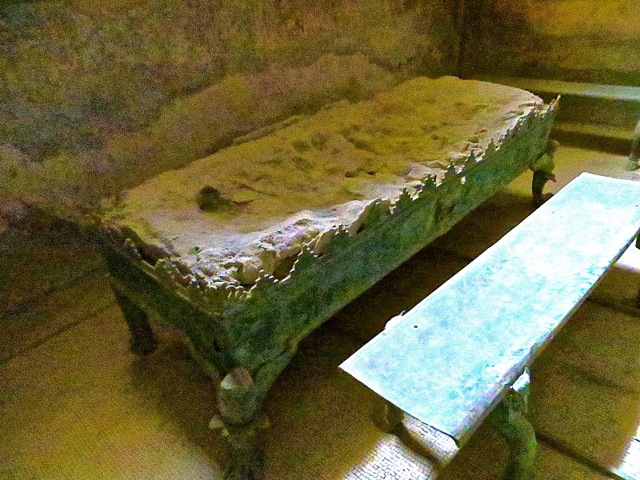 Bathers soaked in this marble tub. 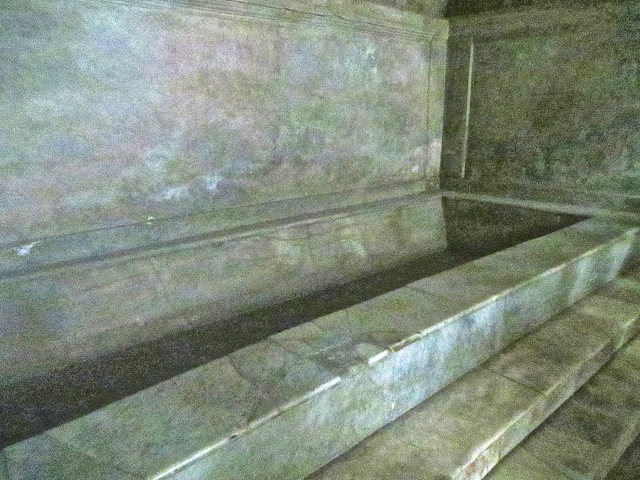 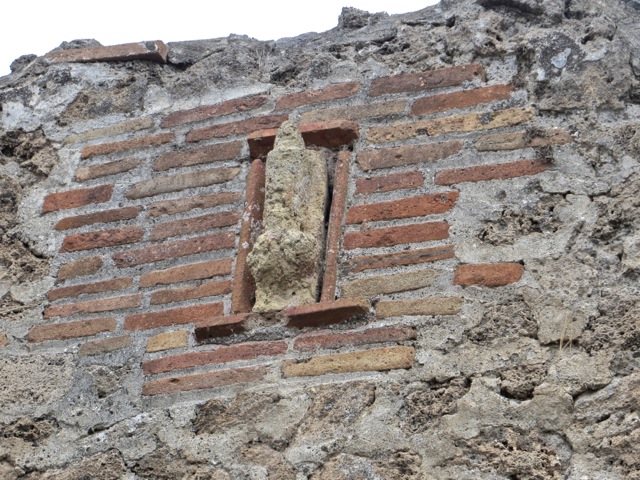 When Pompeii was buried by 20 feet of volcanic ash, thousands of residents could not escape and were buried by the ash.  Eventually, the ash solidified and the bodies decayed away, leaving cavities in the shape of the victims’ corpse.  Archeologists poured plaster into the cavities and recreated the dying postures of the victims.

This person died sitting down, holding his/her nose against the noxious volcanic fume. 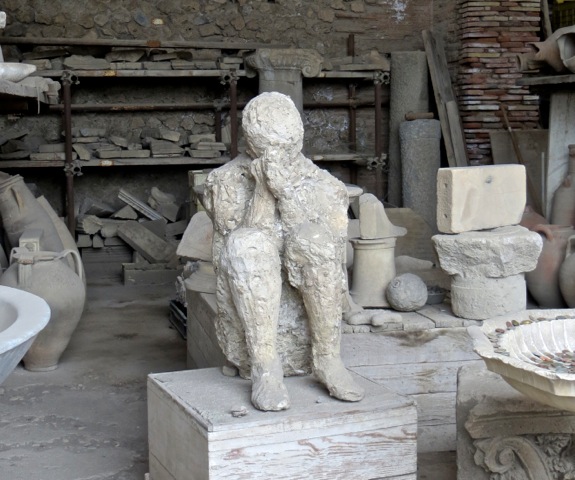 The cast of another victim is cavalierly placed on a shelf, just like another piece of relic.  This is disrespectful and sad. 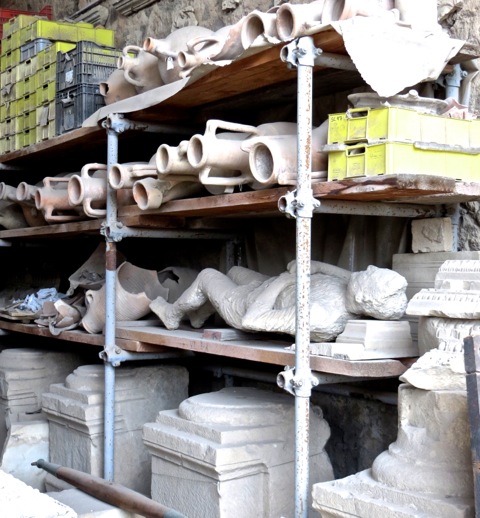