In preparation for a tour of Gautemala, the land of the Mayas, Sally and I started to do some research into the ancient Maya civilization.  We learned about the dead written scripts of the Mayas and find it fascinating.

The Maya civilization flourished in present-day Guatemala, Yucatan Peninsula of Mexico and Belize.  It is generally accepted to have lasted almost 2,500 years from 800 BCE to 1697 when the Spanish subdued the Mayas.  After the conquest, the Spanish imposed Christianity and considered the Mayan religion to be heresy.  In an act of cultural genocide, the reigning bishop ordered thousands of Mayan books be burned, annihilating the Mayan written language.  Only 3 Mayan books are known to survive this fiery purge.  One of them is the Madrid Codex: 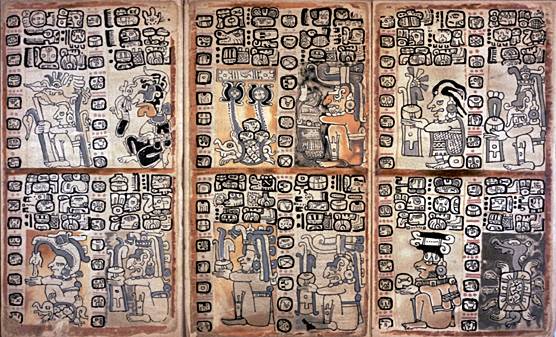 Throughout human history, only five languages are known to be independently developed.  They are the Sumerian (modern day Iraq), Egyptian hieroglyphs, Indus (modern day Pakistan), Chinese and Mayan.

Of all the written scripts in the world, the oldest was the Sumerian which started 5,500 years ago but it died out.  Similar fate fell on the Egyptian and Indus scripts.  The oldest script in use today is the alphabetic writing, in one language or another, at nearly 4,000 years old.  The next oldest is Chinese at 3,500 years old and then Hebrew at 3,000 years old.

Since its inception 3,500 years ago, Chinese scripts have been evolving constantly and simplified from complicated archaic pictures to modern writings.  The word for fish began as a picture depicting fish, then evolved in different stages until today’s modern writing.

This logogram 魚 can be used as the prefix for anything involving fish.  For example, shark is pronounced sha in Chinese.  The character for sand 沙 is read as sha and can be used for its phonetic property.  Combining the logogram 魚 for fish and the sound sha from sand 沙, the character 鲨 is formed for shark.  This character for shark can be written by different positioning of 魚 and 沙:  鲨 and 鯋.

At first glance, Mayan scripts are very complicated and incomprehensible.  Square pictures carved on stone monuments baffled people for hundreds of years.  They look very stylized and extremely ornate, seemingly arbitrary and alien.  Yet they have repeated features that indicate some sort of order and meaning. 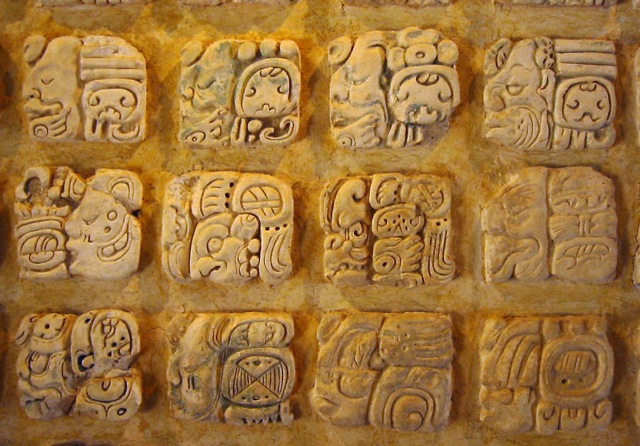 In the last 100 years, scholars have been striving to decipher the dead Mayan script.  After herculean effort, 90% of the Mayan script have been deciphered.  In resurrecting an extinguished writing, modern day Mayans in Central America are learning to write their language in their own script again. 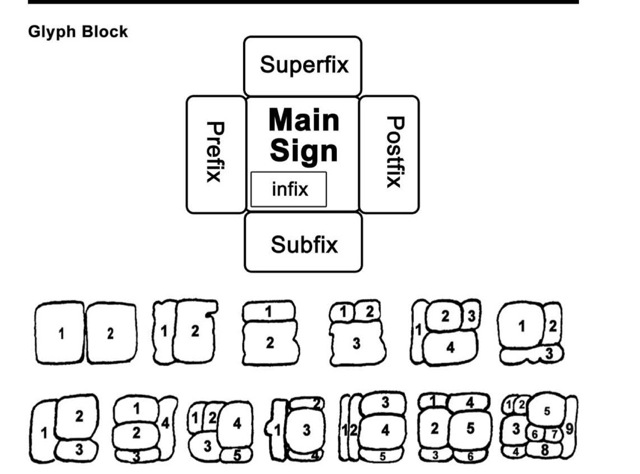 There are about 150 symbols in the Mayan syllabary.  For example, one symbol conveys that sound “bi” and it looks like a square with five tiny circles.  There may be more than one symbol for a sound.  For example, there are three symbols that convey the sound “cha”. 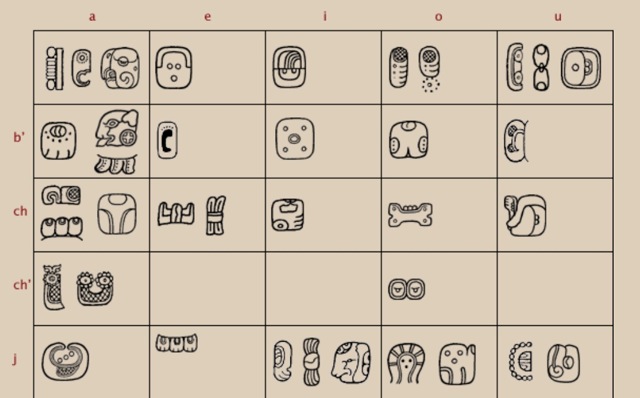 There are about 500 symbols that express specific items or ideas such as jaguar, pronounced as b’alam in Mayan. 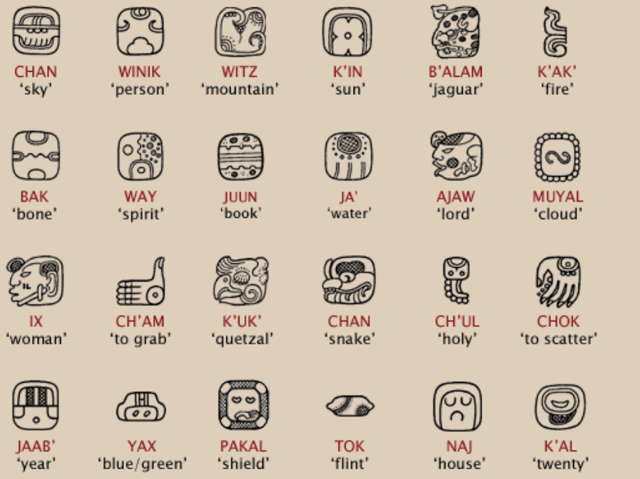 Mayan words can be written as stand alone logograms or all-syllabic combinations.  For example, jaguar can be represented as one logogram that looks like the head of a jaguar, or a combination of three syllabary signs that combine to produce the sound b’alam for jaguar.

But most Mayan words are combinations of logograms and syllabic symbols.  Jaguar, again, can be expressed in the following 5 ways: 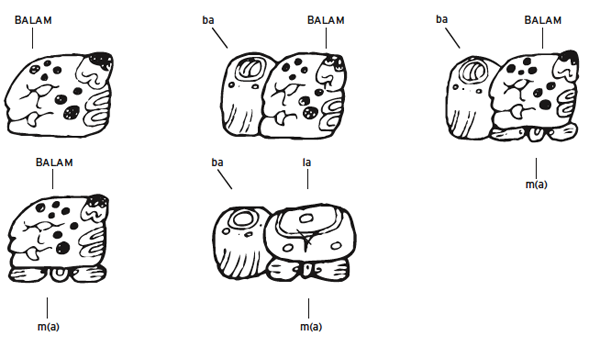 It seems the Mayan script is akin to the archaic Chinese oracle bone script of 3,500 years ago.  While Chinese script evolved into modern writing, the Mayan script stayed archaic through its 2,000 year existence.  Writing Mayan script requires some artistic skills. 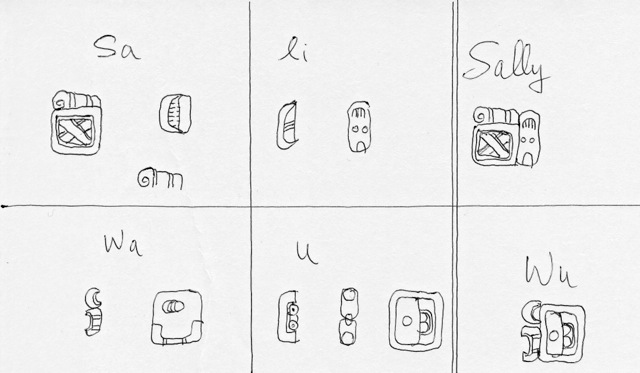 I found a website that translates English into Mayan syllabic symbols.  “Sally” is roughly translated phonetically (sound sa-a-la-la-ya) by this website.  But these five symbols are not combined into one standard Mayan block, so I don’t think they are legitimate Mayan script.  This website should be used for fun only. 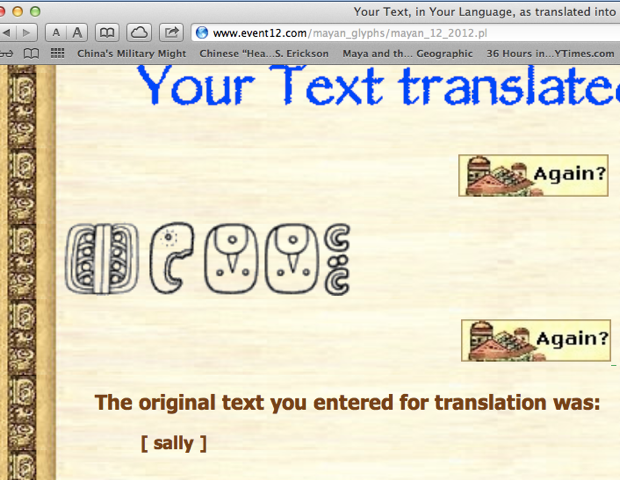