I grew up in big cities and feel most comfortable in big cities.  Two of my favorite cities went through life cycles of population growth, land development, neighborhoods deteriorating into slums, and finally the razing of the eye sores.

When Europeans first settled in Manhattan in 1614, they found it full of forests, hills and streams.  One pond near the early New Amsterdam town was fed by an underground spring, providing drinking water. 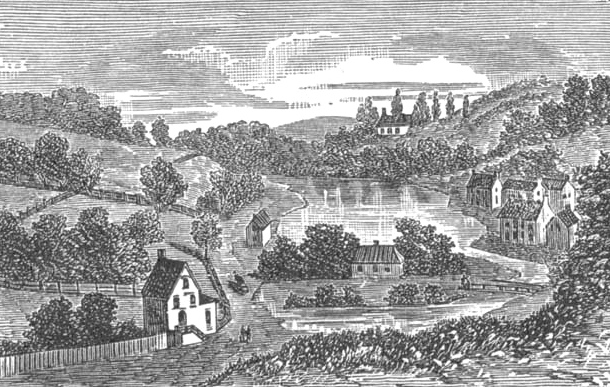 In time, the pond was filled in and paved with streets as New York grew.  By early 1800s, the worst slum of New York City occupied these streets, centered on the notorious Five Points around the triangle named Paradise Square in this map.  Paradise Square was a total misnomer for it was far from being a paradise and it was triangular.

New Yorker readers would recognize Mott, Mulberry, Pell and Bayard Streets on this map as the center of today’s Chinatown. 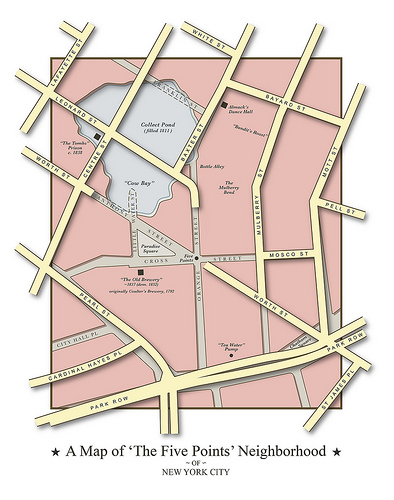 This slum housed many thousands of dispossessed people who grouped on different streets.  They were freed African American slaves, escapees from famine stricken Ireland, Jewish and Italian immigrants and the poorest native-borns.  Chinese immigrants did not come to New York until 1870s, finding housing only in this least desirable neighborhood. 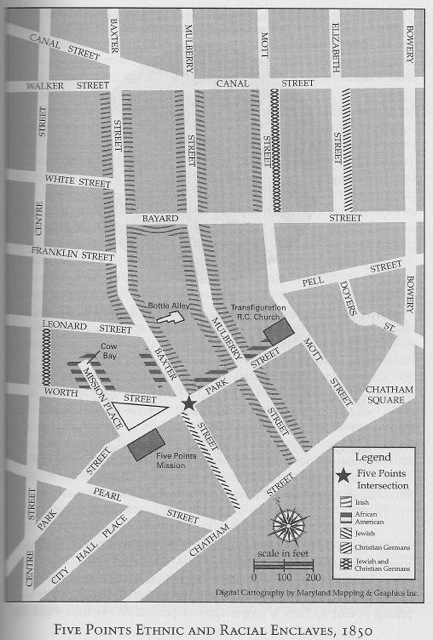 Many buildings of Five Points were built on the filled-in pond, and the underground spring caused many houses to settle and tilt.  After their original owners relocated, these houses were occupied by the poor. 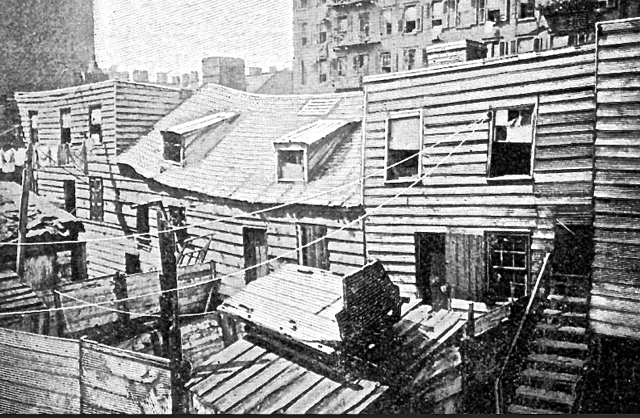 Five Points was notorious for its dense population, poverty, disease, crimes and prostitution.  Gangs known as the Dead Rabbit, Bowery Boys and Roach Guards roamed the streets.  These men hanging around looked menacing. 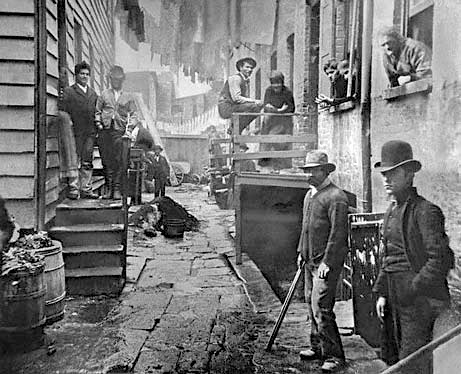 This Old Brewery by the pond became a boarding house for countless destitute tenants.  It was exaggerated in legends to have one murder per day. 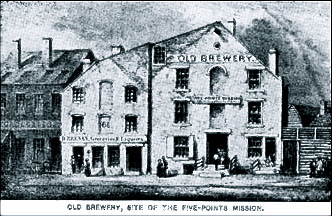 In the movie Gangs of New York, the Old Brewery building was faithfully recreated.  And the triangular Paradise Square was the scene of gang fights between the Irish Dead Rabbits and the native-born Nativist gang 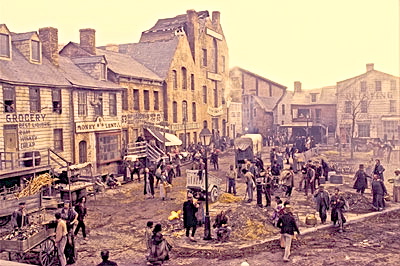 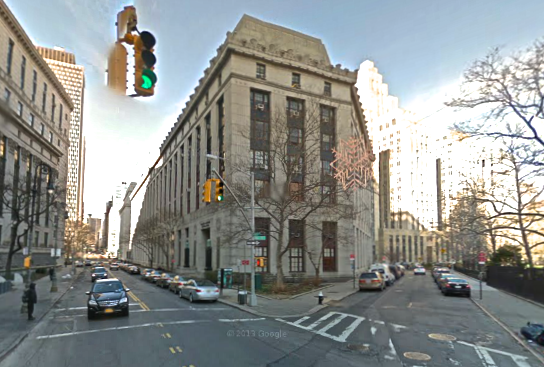 In 1897, the sleaziest blocks with alleys named Bandit’s Roost was completely razed to make way for the Columbus Park. 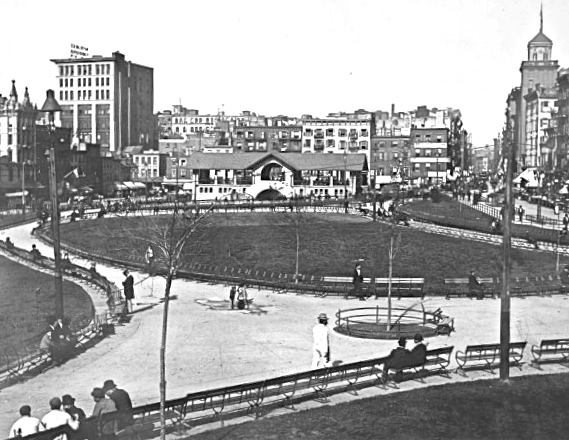 When my son Bryan was young, he rode his bicycle in Columbus Park. 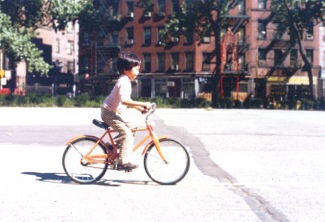 Today, Columbus Park is the open space where many residents of Chinatown gather to chat, play chess and exercise.  As all other residents of Five Points left, new Chinese immigrants replaced them and formed Chinatown. 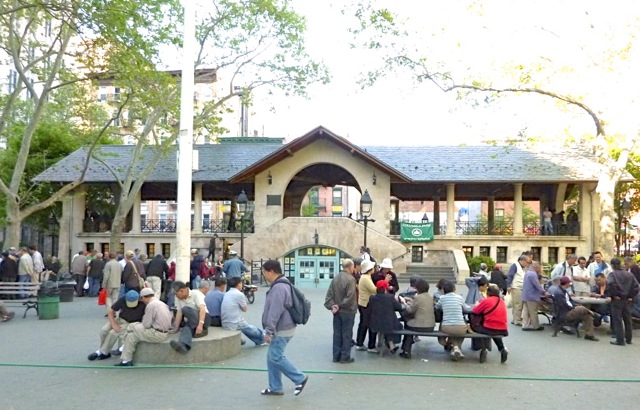 In 1842, British navy defeated Chinese forces in the Opium War (鴉片戰爭) and took Hong Kong as war bootie.  It was as morally condemnable as if the Colombian navy, protecting cocaine cartels, defeated the US Navy and took New Orleans as its colony to import shiploads of narcotics to poison Americans.  To keep an eye on the British, China built the small Kowloon Fort (九龍寨) just to the north of the straight border. 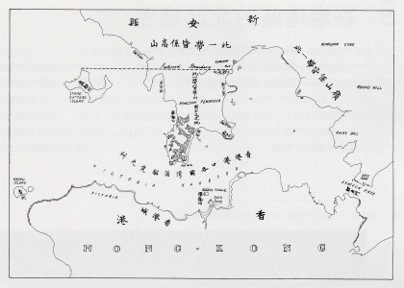 The walled fort sat at the foot of a hillock with an auxiliary wall climbing up the slope.  The garrison of about a hundred soldiers was a declaration of Chinese territory.  When Britain subsequently leased New Territories (新界) around the fort in 1898, China retained sovereignty of the fort. 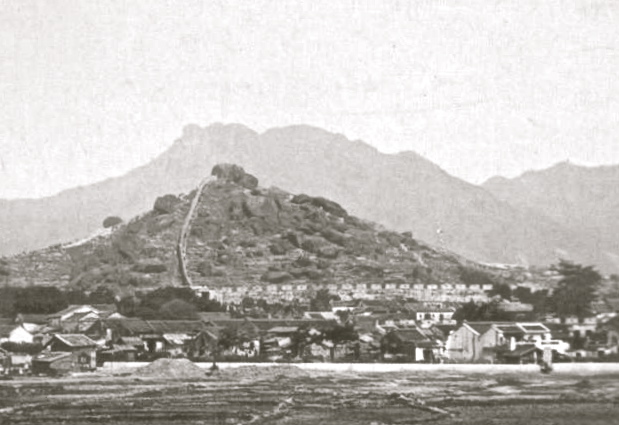 After WWII, millions of refugees fled into Hong Kong from China.  Some found housing at the site of the fort with indeterminate sovereignty and was beyond the control of the HK police.  Unregulated construction proliferated into a solid block of buildings, a dozen stories tall, leaning against one another for support. 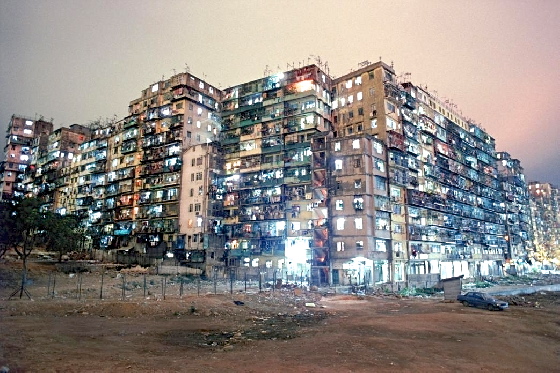 This map shows the labyrinth of 350 buildings occupying the lot of the former fort.  Original official buildings (衙門) of the fort were retained in the center as a school and a senior center.  Outsiders avoided venturing into this mysterious 3-dimensional maze of drippy alleys, steep stairs and dark corridors; deterred by its reputation as a haven for crimes. 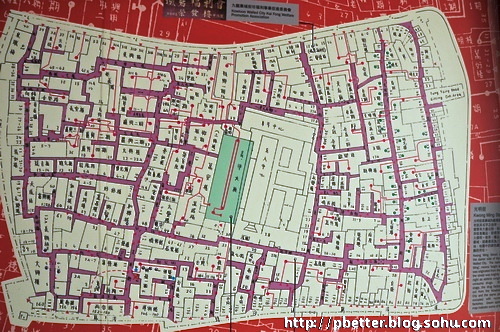 A Japanese group surveyed Kowloon City and published its cross sections in a book.  It reflected the crowded condition of the houses, the interconnections among parts of the block, and the myriad of activities.  With a population of 33,000 on 6 acres (2.6 hectares), it had one of the world’s highest residential density of 3 million persons/square mile. 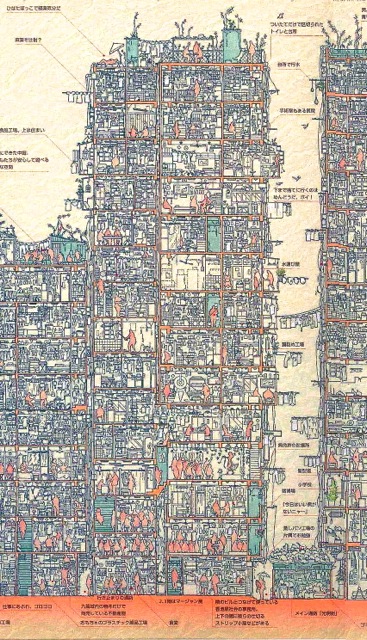 This old canon resting in an alley was a reminder of the fort’s original purpose. 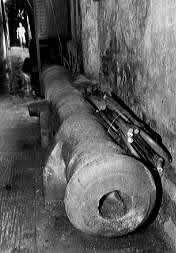 Police seldom patrolled the City, and many illegal activities took place there.  As these buildings were built without authorization nor coordination with the utilities, the residents had no legitimate water or electricity supply.  They had to haul drinking water up a dozen flights, and wove a spider net of electrical cables tapping illegally into the power grid.

I peeked into the City at an alleyway entrance.  Unregulated jumbles of cables and pipes hanged overhead, dripping water on wary pedestrians.  It was creepy and repulsive.  I did not enter the City. 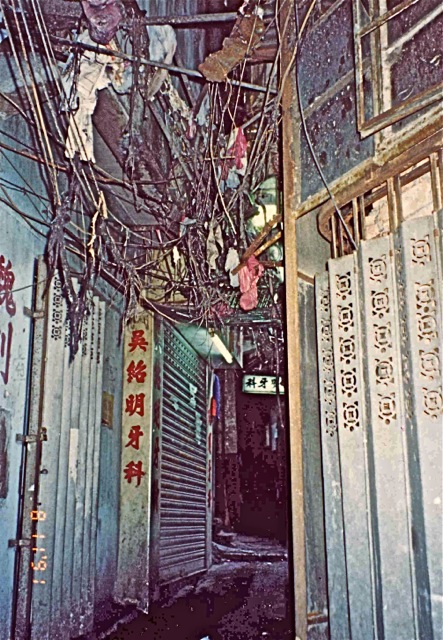 Being in the grey area of the law, Kowloon City proliferated in illegal activities including gambling, prostitution, and drugs.

Doctors and dentists from China were not licensed to practice in Hong Kong.  They found Kowloon City a fertile ground to operate unlicensed medical and dental practices.  This facade of the block was covered with clinic shingles.  It was the place to go for abortion before it became legal in Hong Kong. 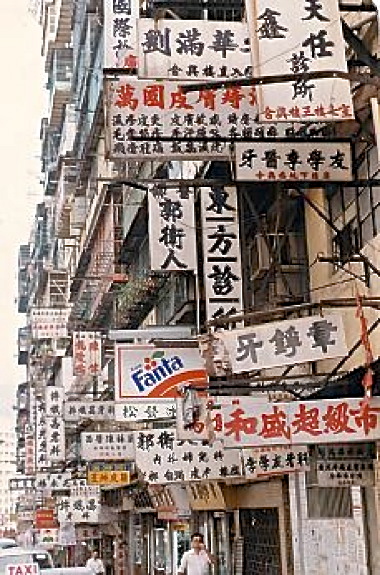 Organized crime gangs controlled Kowloon City.  They maintained public order by force.  This notice on a wall warns robbers that their arms and legs would be chopped off if caught.  That was quick and intimidating justice. 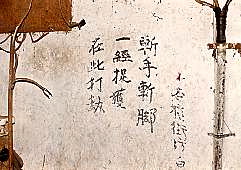 By 1990, the block of overgrown buildings became an eyesore as the rest of Hong Kong became a modern city.  After Britain agreed to revert Hong Kong back to China, the two governments agreed that Kowloon City should be demolished.

Before Kowloon City was torn down, the Japanese group surveyed the buildings for their book and Jackie Chan (成龍) was allowed to use its empty buildings to film the movie Crime Story (重案組). 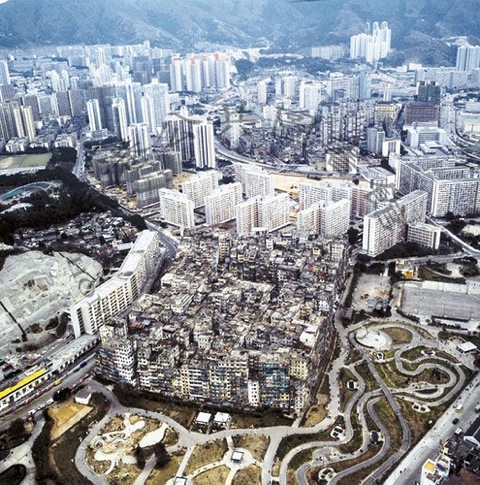 In 1997, I visited the site of Kowloon City which had been converted into a park.  All buildings were removed except for the original buildings of the fort.  This was the garrison chief’s official building (衙門). 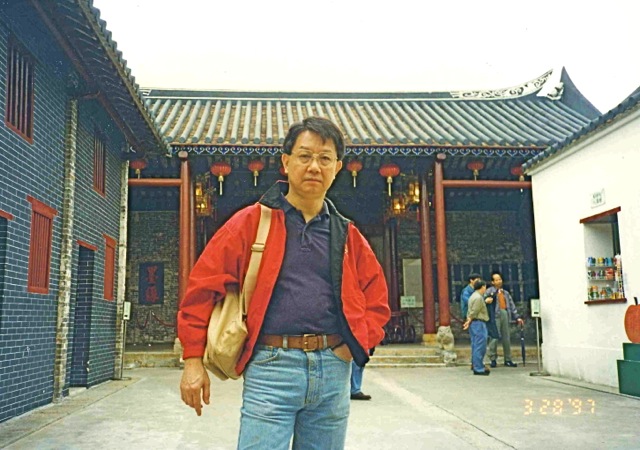 In converting the site into a park, remnants of the fort were discovered.  Paving stones were found under a newer foundation.  The stone signs over the fort gate were recovered, correcting the official name to 九龍寨城 ( Kowloon Fort City) instead of the commonly used 九龍城砦 (Kowloon City Fortress). 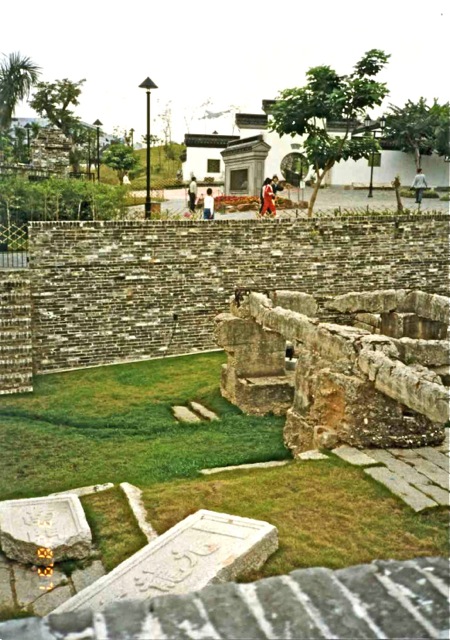