To read all other SFM articles, please access  http://www.starferrymusings.com/

Sally was really looking forward to visit the Sistine Chapel of the Vatican Museums.  I reserved tickets two months ahead for the day we would be in Rome and budgeted three hours to see the highlights of the museums.

Upon arrival at the Vatican Museums, we found Vatican to be surrounded by high walls that separates this sovereign country from Italy.  As Popes often had to wage wars against political and religious rivals for over a thousand years, this wall served a real defensive purposes. 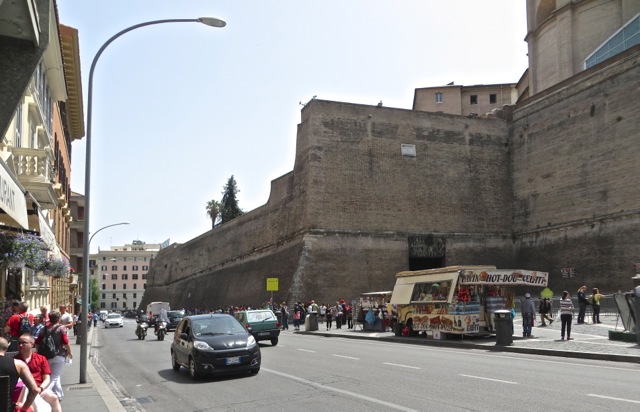 This gate is the exit from the museums.  The entrance is a non-descript doorway on the side. 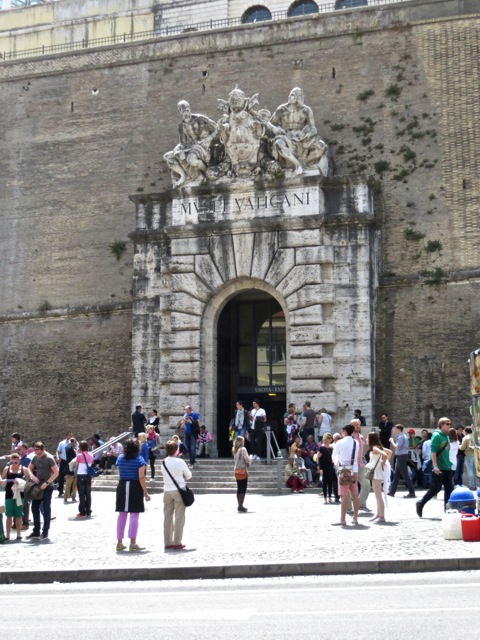 The Vatican Museums occupy several large buildings, nearly 1/2 mile long, next to the St. Peter’s Basilica.  With their multi-story galleries, the museums cram art pieces into 9 miles of corridors.  Serious art connoisseurs can spend months admiring the huge art collections of many Popes.  As we were constrained in time, we primarily wanted to visit the Sistine Chapel and view its paintings by Michelangelo.  We wanted to take the direct route from the entrance to the Chapel without winding through the many galleries and rooms.

The map distributed by the Vatican Museums was difficult to read or use for guidance.  Once inside, we quickly became disoriented.  We did not know where we were, which way was north, or where the Sistine Chapel was.  We were herded into a closely packed stream of people and followed signs pointing to the Chapel. 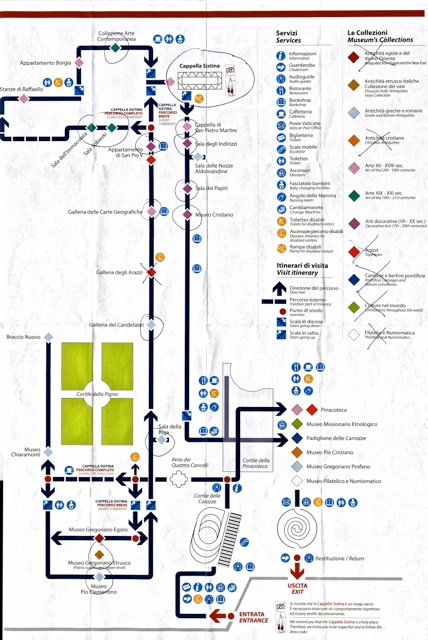 There were signs indicating the way towards the Chapel. 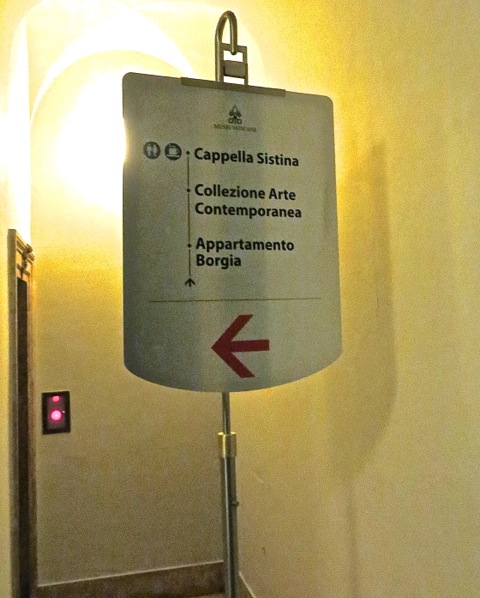 The massive crowd of disoriented visitors followed the person in front and shuffled through long halls under construction.  Initially, visitors took pictures of everything, even blank walls. 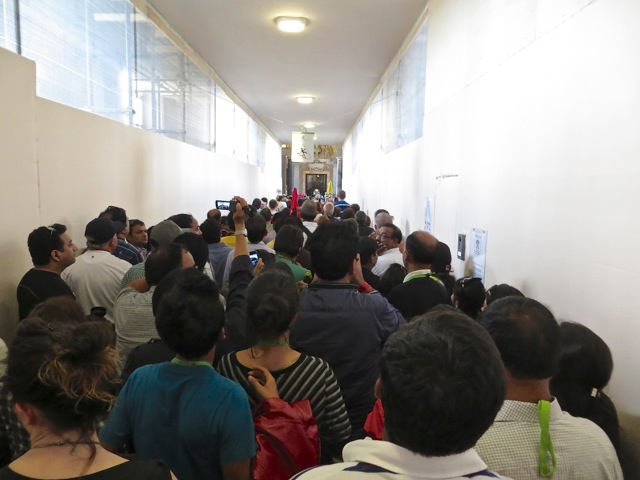 They filed through ornate galleries with painted ceilings and walls covered by huge tapestries.  Everybody was busy taking pictures. Vatican Museums permits photos everywhere except in the Sistine Chapel.  Looking down the line of people, I could see countless camera and iPad monitors. 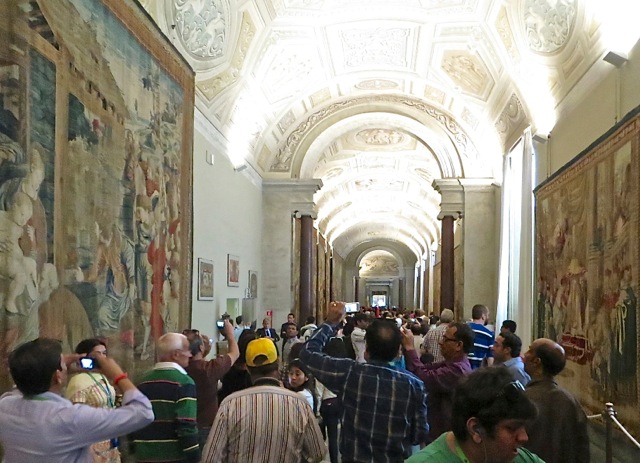 Following this sign, the visitors were led down to the bowels of an elaborate labyrinth. 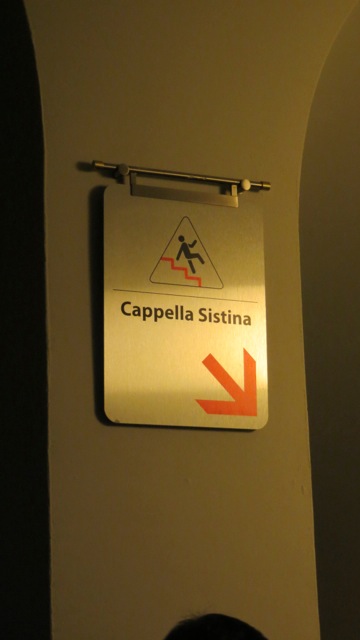 As we did not know where we were nor where we were heading, very soon the horde of people lost interest in admiring the beautiful art works and quietly shuffled under ceilings with overkilling number of paintings. 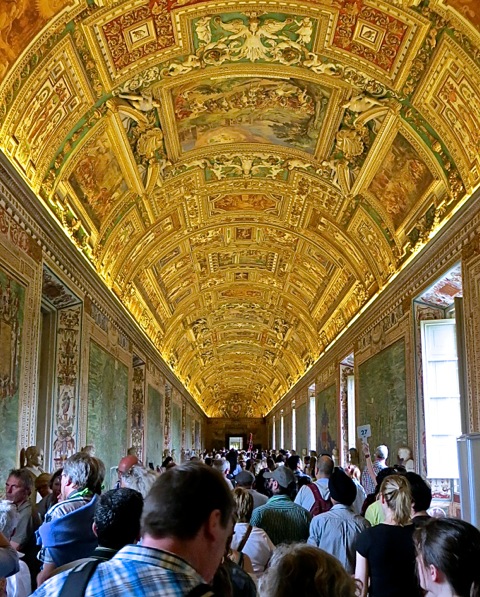 Some ceilings were not too crowded with paintings.  The paintings here are spread out and permitted the viewer to appreciate individual works of art. 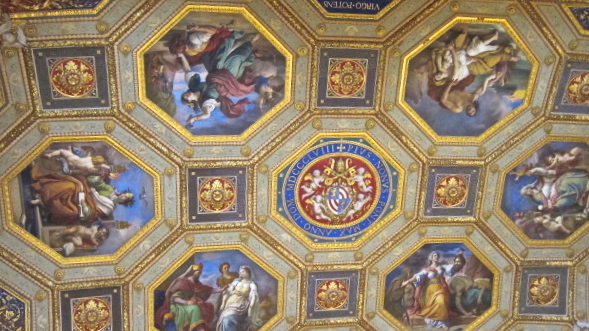 This painting had a piece of wood attached to the pants of a man.  For modesty? 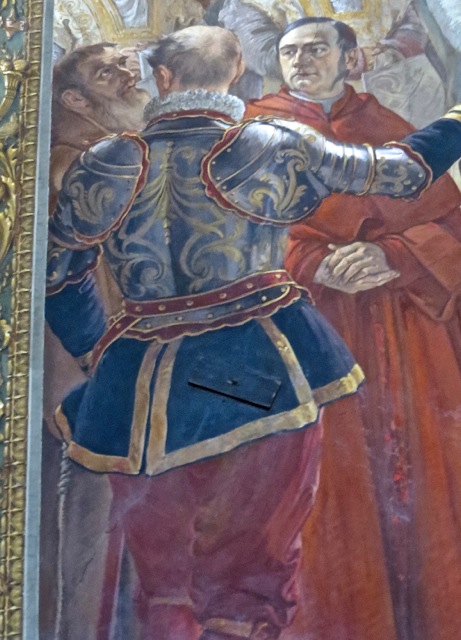 Some painting were light hearted and cheerful. 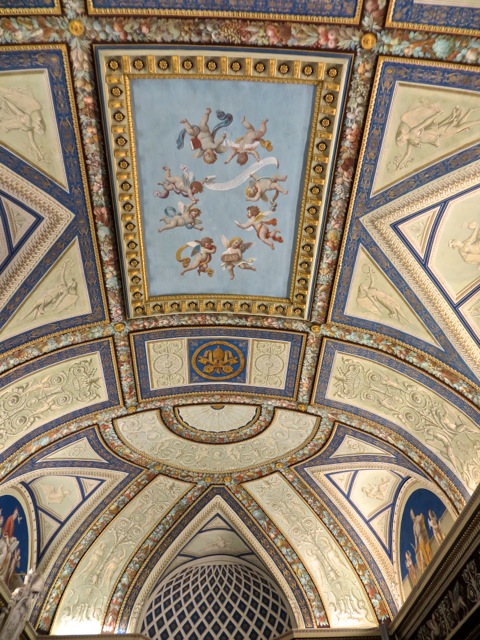 But the tired and dispirited flock of lost lambs still had to climb up and down stairs, teased by frequent signs promising the Sistine Chapel. 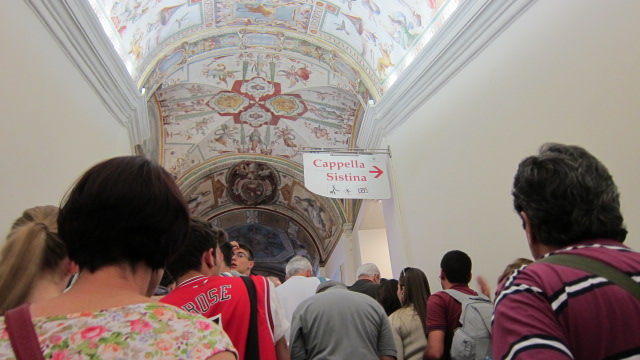 At the end of an one-hour shuffle, the silent crowd filed through a series of doors. 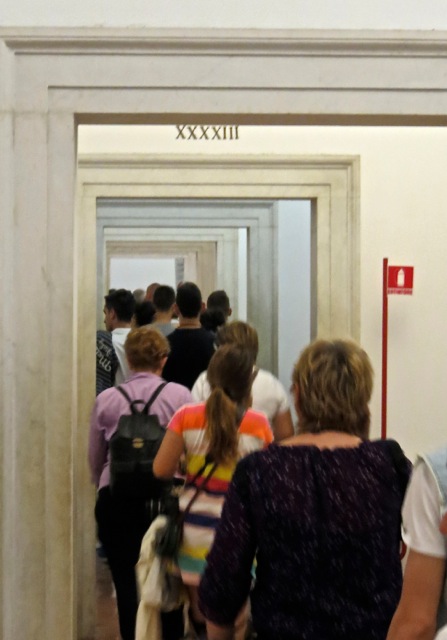 And suddenly, the flock reached the promised land.  The Sistine Chapel is an important venue for Vatican activities.  The Popes are elected by cardinals gathered in this Chapel.  Dozens of guards milled among hundreds of standing visitors to make sure they don’t take photos in this important hall, and to continuously hushed the people from talking.  This picture is taken from the web since I could not take pictures of it. 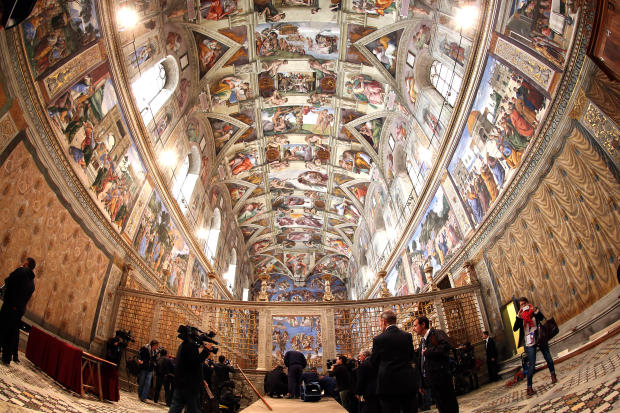 The visitors blinked their eyes to acclimate to the dark room, craned their heads and searched for Michelangelo’s painting of Creation of Adam.  They found it among dozens of paintings on the ceiling 70 feet above the floor, but the lack of lighting in the room rendered the painting a distant, dark blur.  What we saw was much less dramatic and less clear than this nicely photographed image

In retrospect, we felt the visit to the Vatican Museums was one of the least enjoyable experiences of our travels.  We were caught in a slow but unstoppable flow of humanity.  We were disoriented and did not know how long we had to endure the cattle drive.  We were tired but there was not place to rest or to get a drink of water.  It was close to our version of the Bataan March.

If an emergency such as a fire broke out, the crowd of packed people would be in danger.  There were no signs indicating fire exits, and there were too many doors leading into other similar rooms.  I am sure many fire codes are broken by this museums.  But the Vatican is a sovereign country with its own laws.  It answers to no-one but God.

If we knew what we would experience, we would have forgone this visit.  We would enjoy watching it on TV and leave the shuffling to younger, more artistic and more enthusiastic folks.