Mesoamerica refers to the ancient lands of Mexico, Guatemala and the other Central American countries before the arrival of Europeans.  Mesoamerica housed many tribes who spoke different languages, formed competing city-states and never coalesced into empires.  The exception was the Aztecs who built an empire in 1400s shortly before being conquered by the Spaniards in 1500s.  I always wondered how the Spanish were able to conquer this empire with only a few hundred soldiers.  It turns out the Spaniards allied themselves with rebellious tribes in overthrowing the Aztecs; before they enslaved those helpful tribes.

Mesoamerican tribes share some common cultural characteristics.  They based their economy on corn agriculture, built stepped pyramids, used a base 20 numbering system, and practiced human sacrifice.  Isolated in the Americas, they developed their wondrous civilizations independent of influence from the Old World.

The Mayans occupied the blue area in this map. 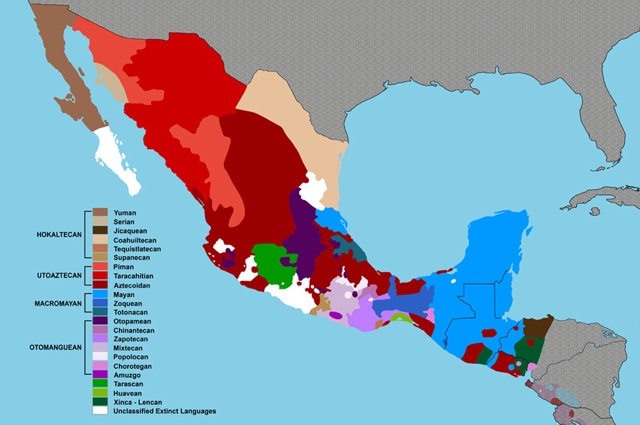 The Mayan civilization started about 3,000 years ago.  It is generally classified into the preclassic, classic, and postclassic periods; it ended with the Spanish conquest in 1500s.  We were to visit four sites that flourished in the classic period of 600 – 800CE, contemporary to the splendid Tang Dynasty (唐朝) of China.  They were Yaxha, Tikal, Qurigua and Copan. 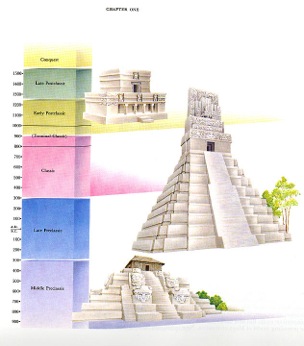 A location would be occupied by the Mayans for many centuries before it was eventually abandoned.  During those years, buildings were repeatedly built over older ones.  In this archeological cut into a pyramid, four layers of buildings are visible. 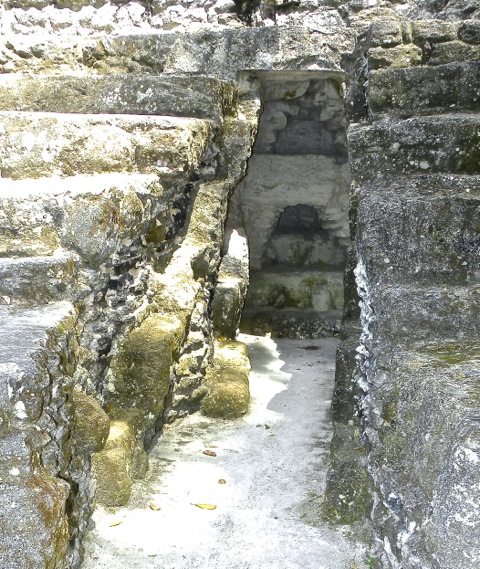 The Guatemalan lowlands were covered by rain forests.  We had to walk on uneven trails and be careful not to trip over exposed roots.  Everybody in our tour group was retired, with one man aged 80, and we all trooped on.  The trees grew in the few inches of top soil that covers the solid limestone underneath.  That the Mayans developed a great civilization in this poor unproductive land is a testament to their persistence and innovation. 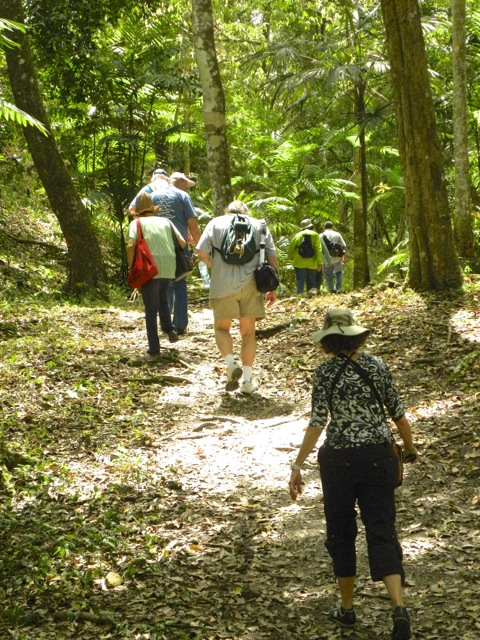 Due to some unknown catastrophe, the Mayans eventually abandoned the city-states.  Their monumental structures were swallowed by the forest and their presence was obliterated.  A low pyramid lies beneath this pile of sediment, waiting for the archeologists’ trowel. 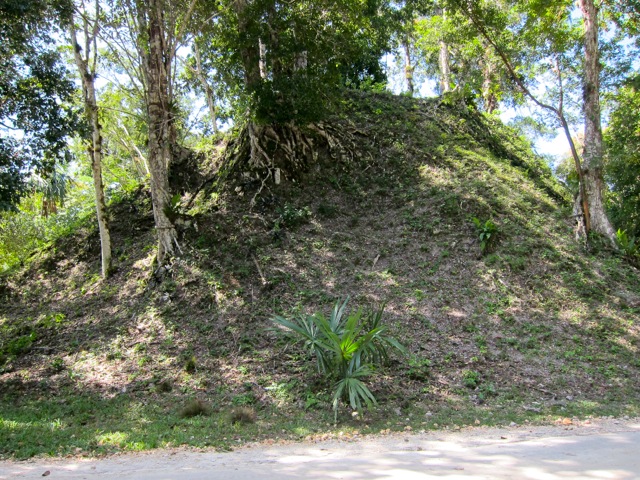 The right side of this structure is restored while the left side is left as found. 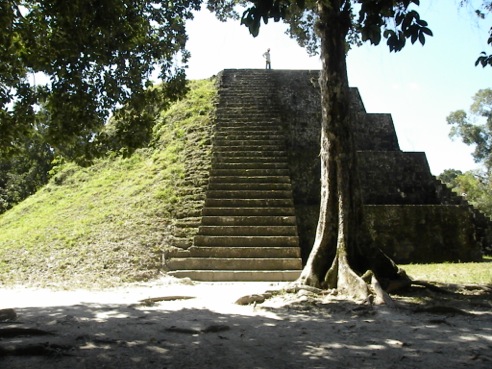 Scaffolds are used to restore the top of this tall pyramid. 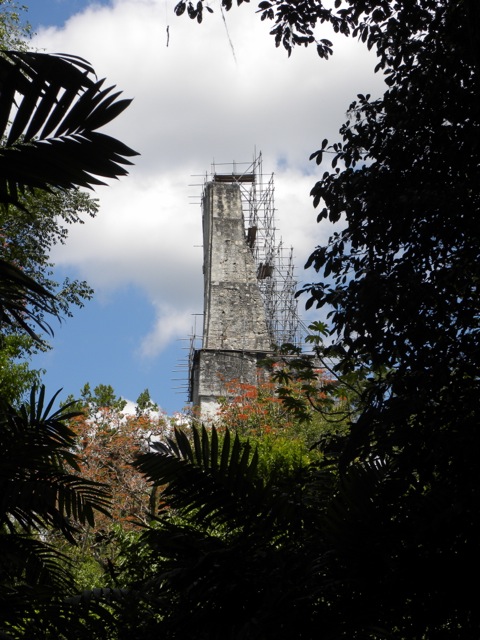 Mayan structures are constructed with stones piles and faced with mortared walls.  Most of the stones are of manageable size, and only some are cut and dressed. 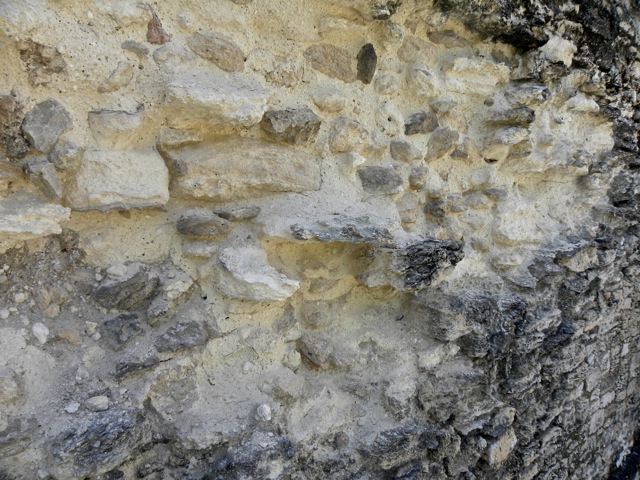 In contrast, the Inca stonework in South America is much larger and carefully dressed to fit seamlessly.  While the Inca appeared to be more advanced than the Mayan in construction methods, they never developed writing as the Mayans did.  They excelled in different fields. 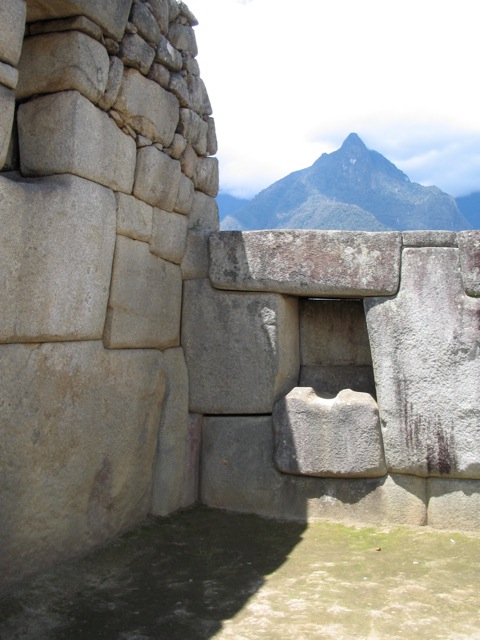 This was an observatory in Yaxha for observing astronomical phenomena. 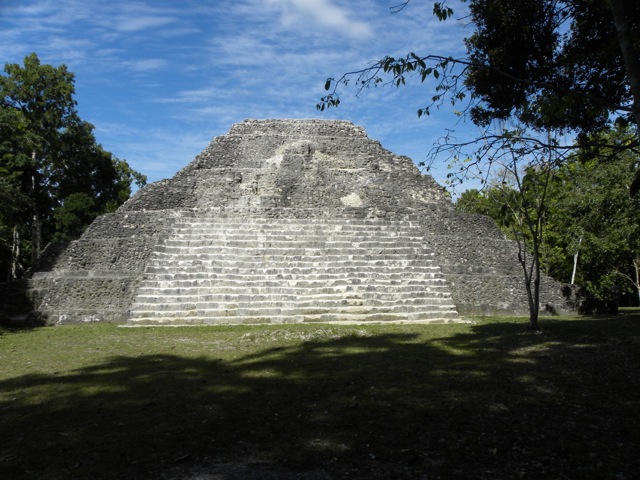 A king’s residence sat on a high platform with three steps.  Three was an auspicious number.  The house on top of the platform had three doors. 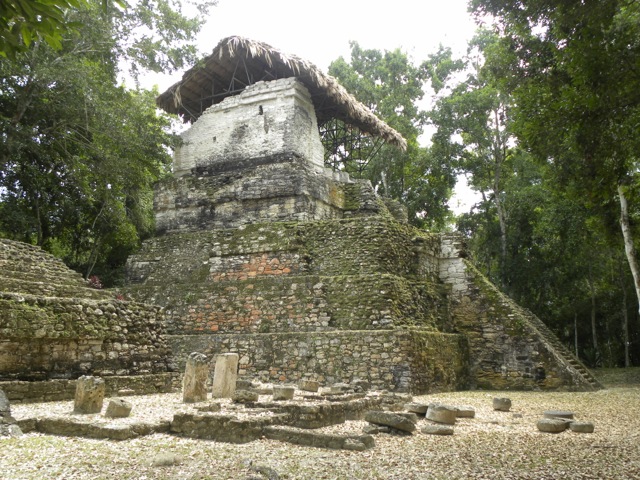 This room had a stone roof and a wooden lintel over the door opening. 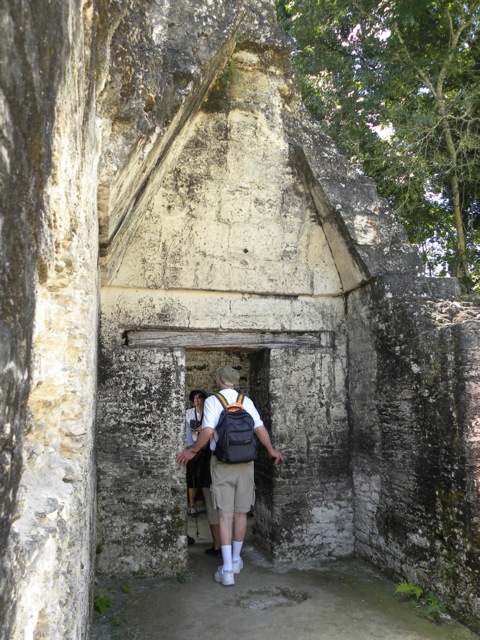 The residence of the Tikal elite was enclosed by Temples I and II. 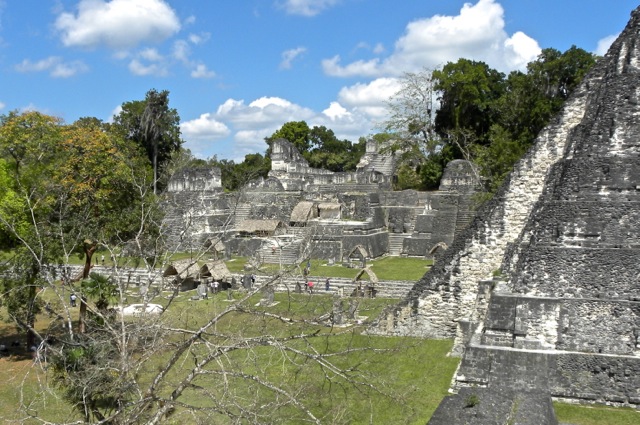 Temple I was built as a pyramid with nine steps, a number connected to death or hell.  The shrine on top was devoted to a deity and was crowned by a high crest.  This temple was built over an earlier tomb which was reached by a downward stairway. 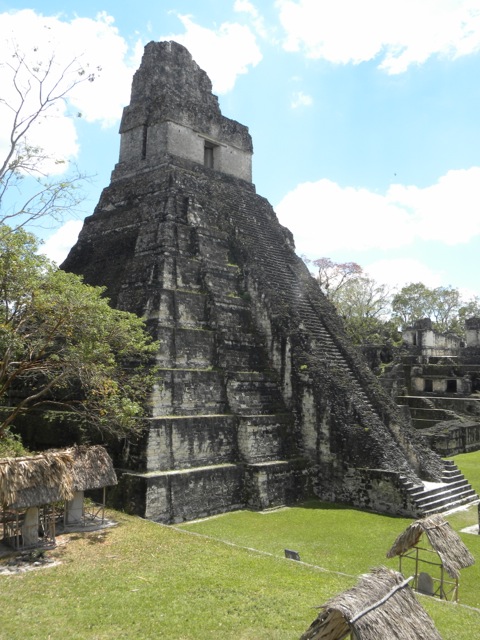 Across the Great Plaza from Temple I, Temple II sat on a pyramid with three steps, an auspicious number.  This pair spoke of life and death. 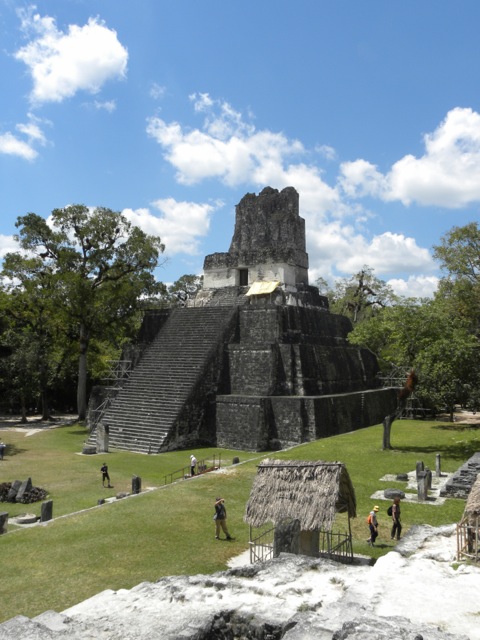 Wooden stairways were built to reach the peak of tall pyramids. 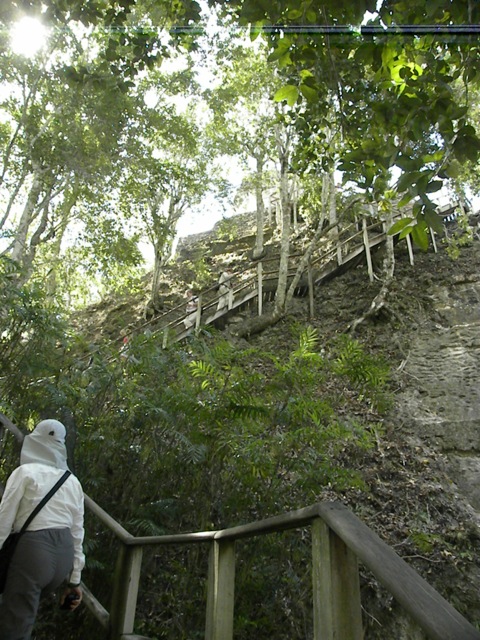 The tall Temple IV was topped with a platform and a shrine.  We had to be careful and not fall off the edge. 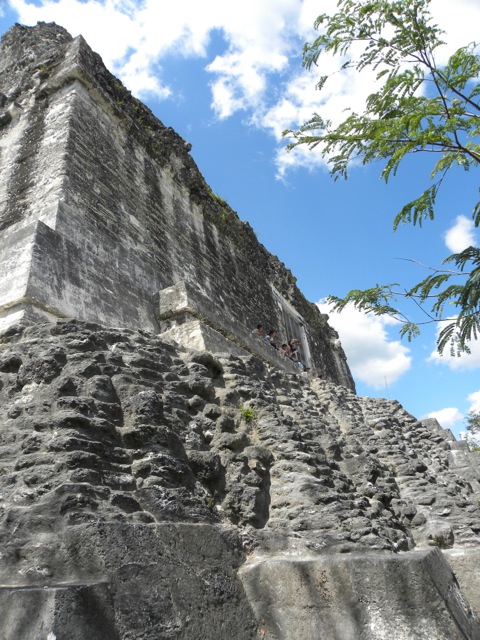 I enjoyed an unobstructed view of the rain forest from the peak of Temple IV. 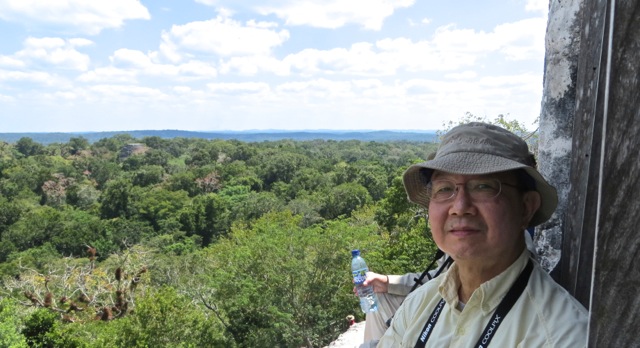 One of the possible reasons for the demise of Tikal was the extensive use of stucco to dress all Mayan monuments.  Under a layer of stones, an earlier stucco mask covered a wall. 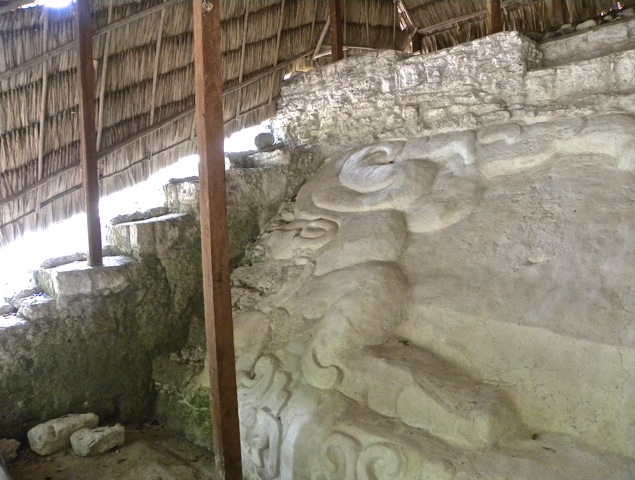 Stucco was made with lime produced by burning limestone in big pits such as this one.  The insatiable demand for lime depleted the trees and ruined the environment for the Mayans. 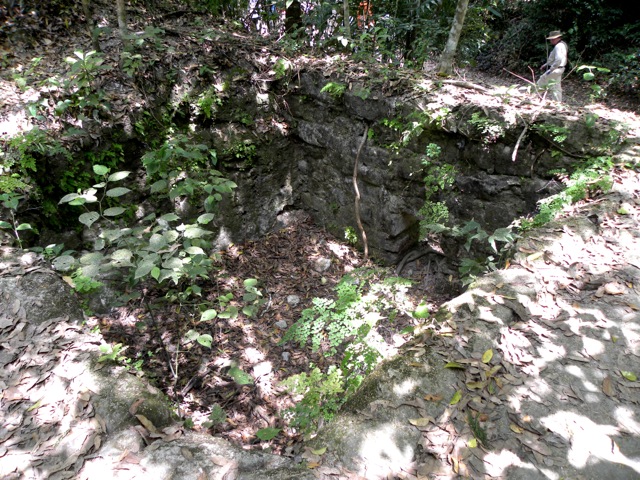 In Qurigua, tall stelae were uncovered when the land was cleared for banana plantations.  Much information was gleamed from these stelae. 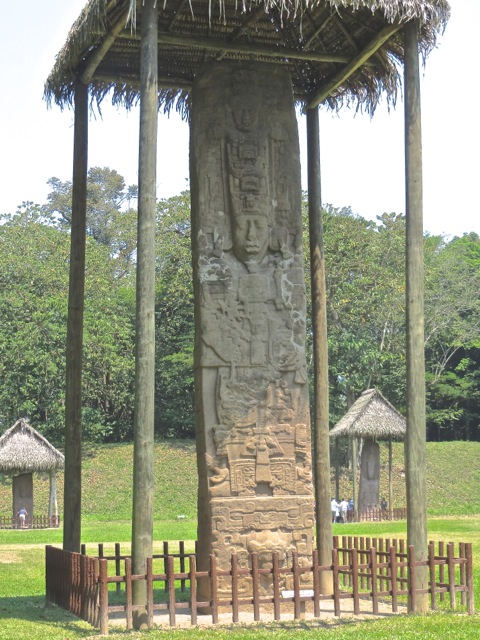 An iridescent beetle seemed to be reading this Mayan script on a stela. 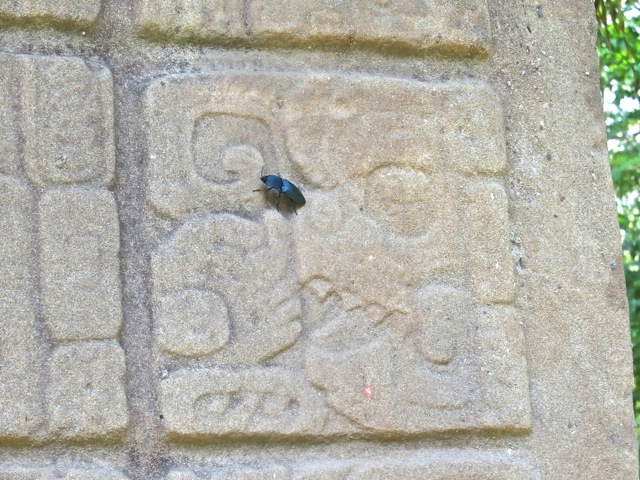 Our last site was supposed to be Copan in the Honduras.  Copan was on the southern edge of the Mayan sphere and featured elaborate sculptures and adorned buildings.  This stone stela from Copan was carved with clear Mayan glyphs. 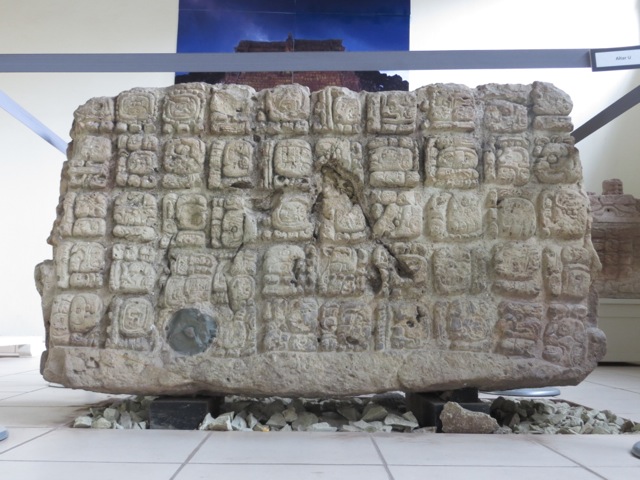 But our access to Copan was unfortunately blocked by men carrying sticks.  We were not ready to risk confronting these men. 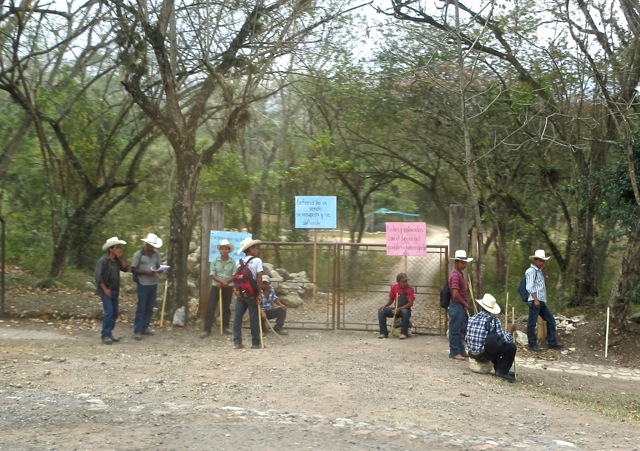 We stayed in Honduras overnight and went back to Copan the next morning.  The park was still being picketed by this large group of peaceful demonstrators.  These Hondurans were asking the government to deliver farming land and better pay, as promised earlier.  Without access to Copan, we missed at least 1/4 of the sights we planned to visit.  Oh well, I will have to read about Copan on the internet. 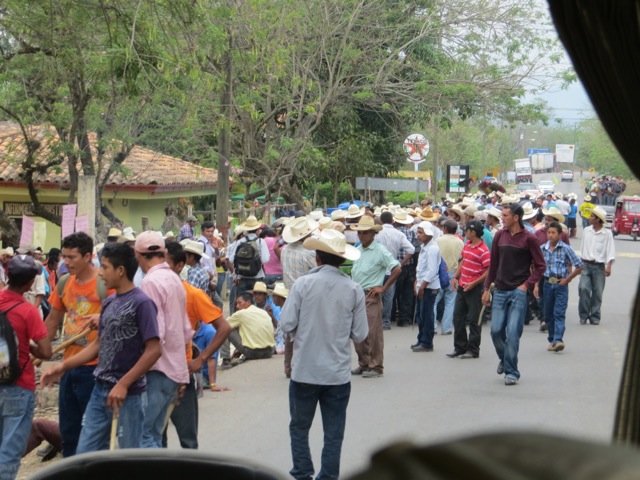