Of all Spanish cities we visited, we like Barcelona the most.  We found it to be lively, artistic, and full of charm.  In particular, we enjoy walking around and looking at its numerous beautiful buildings.  At the end of 19th century/beginning of 20th century, Art Nouveau style was the rage with its natural inspirations, graceful designs and curved lines.  Barcelona was the center of Spain’s Art Nouveau movement.  Many of Barcelona’s buildings are recognized by UNESCO as World Heritage Sites.

Antoni Gaudi was Barcelona’s preeminent architect during that period.  We saw three of his outstanding buildings.

Casa Mila is very unlike its neighboring buildings.  It is full of curves and fantastic elements.  It is said the building does not have any straight lines.  At first glance, it looks like somebody’s drunken dream. 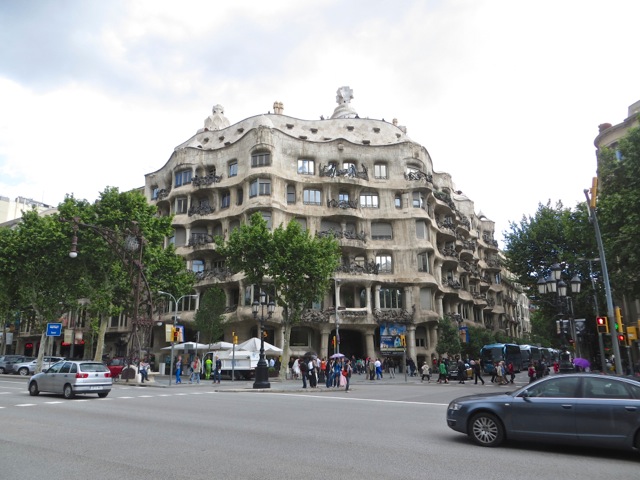 The balconies are all curved with imaginative wrought iron railings. 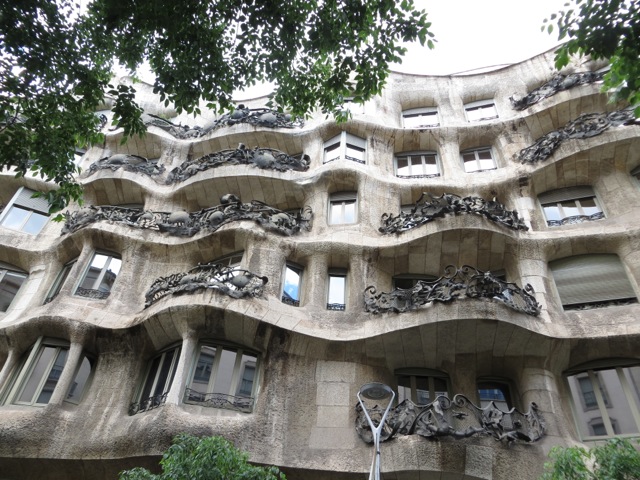 Each block of its limestone is individually designed and carved to fit together into a free-form building. 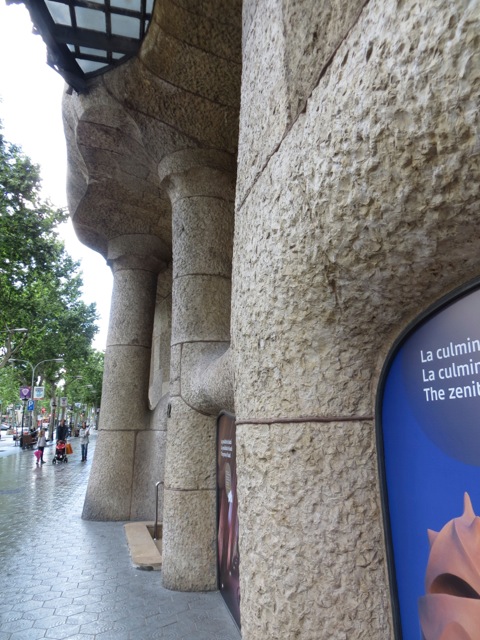 While admiring this building, we were caught by a rain shower and took refuge in the sidewalk cafe by the building.  We were surprised to see the rain shower turn into a hail of tiny bits of ice. 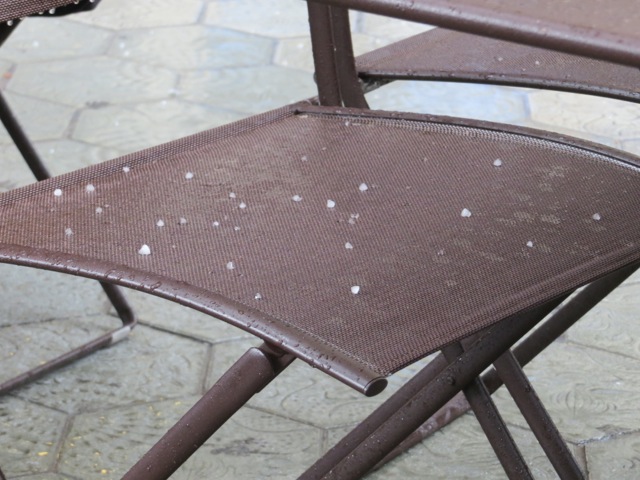 Casa Batllo is an existing building that was boldly renovated by Guadi.  For its undulating roof ridge and scale-like roof tiles, it is nicknamed the Dragon Building.  With its wall covered by colorful glass discs, glazed tile mosaic and pastel color scheme, this building is a fantastic and cheerful sight to see. 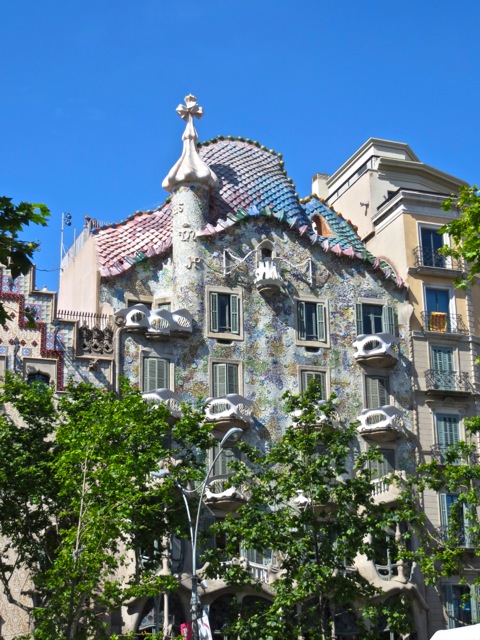 The second floor of the building has gaping windows supported by knobby columns that resemble bones. 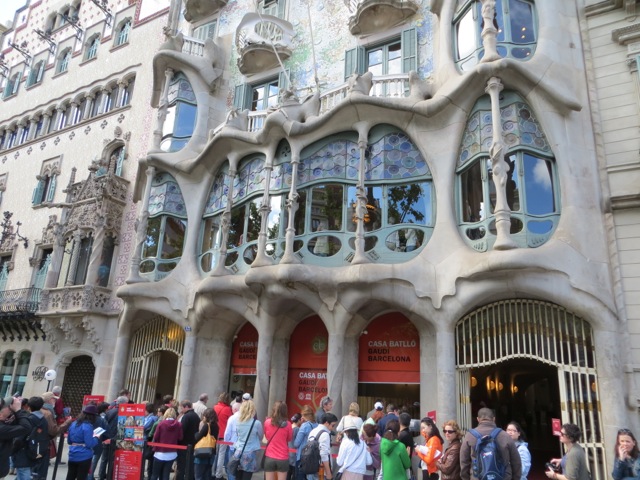 The balconies give the impression of skulls with hollow eye sockets.  These macabre features renders it another nickname as the House of Bones, and are in discord with its cheerful color scheme. 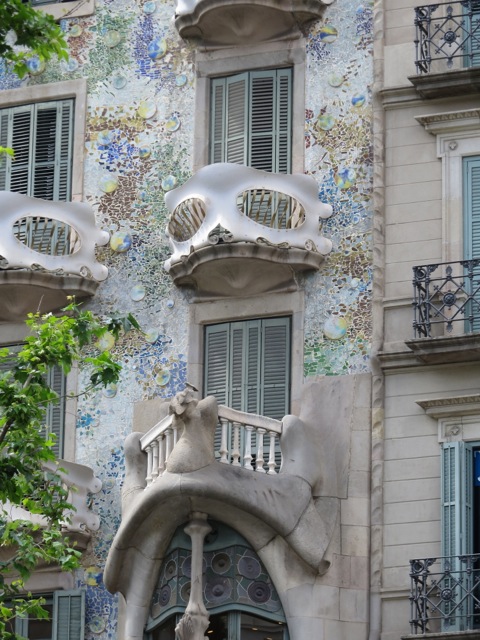 While the building is full of lovely custom-designed features, I was slightly dismayed to see a simple and plain railing on its roof.  This must be a later addition by an uninspired maintenance person. 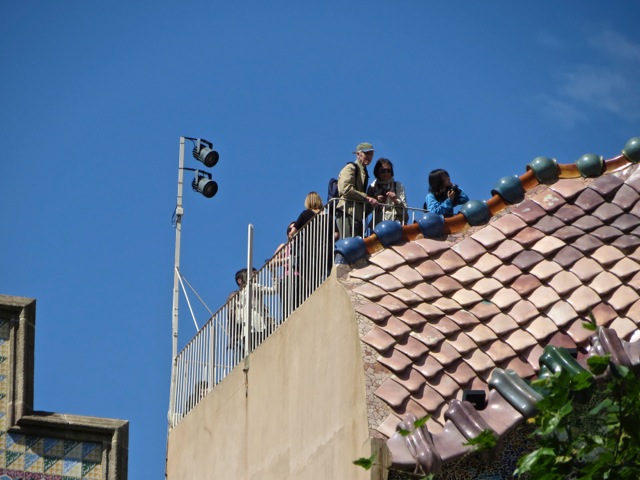 Gaudi’s masterpiece is the monumental basilica Sagrada Familia.  Construction began in 1882 and is now projected to complete in 2026, 99 years after Gaudi’s death.  Lasting 150 years, this is one of the longest construction projects in history.

When the construction began, it was estimated to take a few hundred years to complete.  Nowadays, construction is expedited by technology.  For example, stones are formed by computer numerical controlled (CNC) machines instead of chiseled by hand.  Whereas cranes and elevators hoist workers and materials a few hundred feet up today, they had to be brought up by manual labor a hundred years ago. 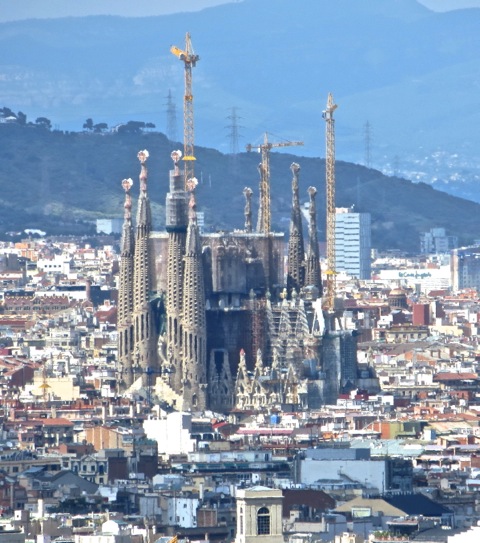 Gaudi combined gothic and curvilinear Art Nouveau designs into the Sagrada Familia.  While Art Nouveau was usually applied as surface decoration, Gaudi carried the Art Nouveau concept much further into the space and flesh of the building.  Here, two visitors in a balcony are lost among the busy and confusing architectural elements of the basilica. 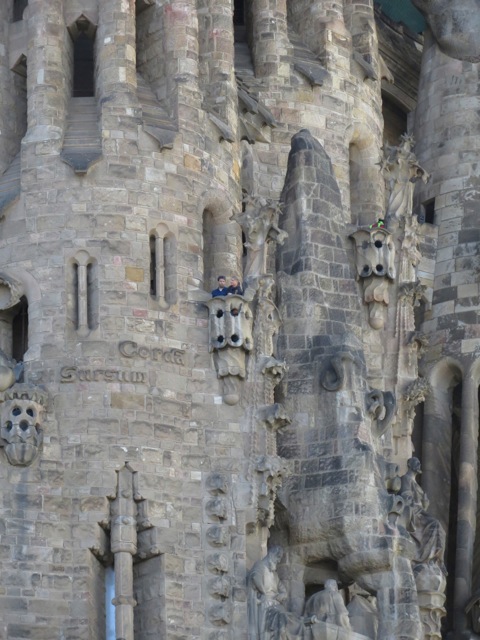 Sagrada Familia seamlessly combines elements of traditional gothic design such as this low structures with fantastic Modernista design of the tall spires. 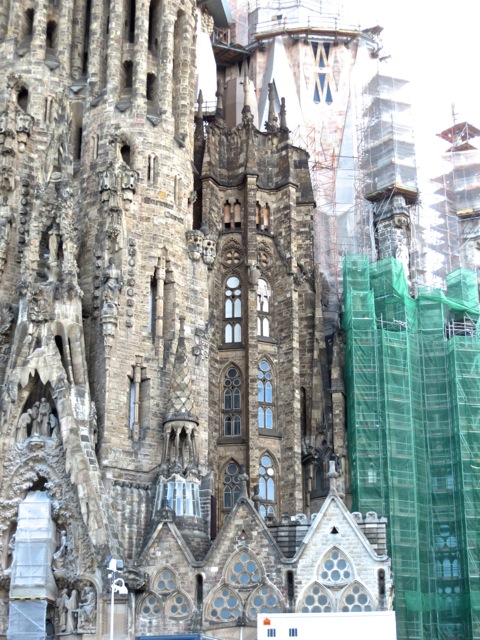 The Nativity facade is the only one completed while Gaudi was alive.  It sets the tone and style of his vision for subsequent architects to follow in completing other parts of the building. 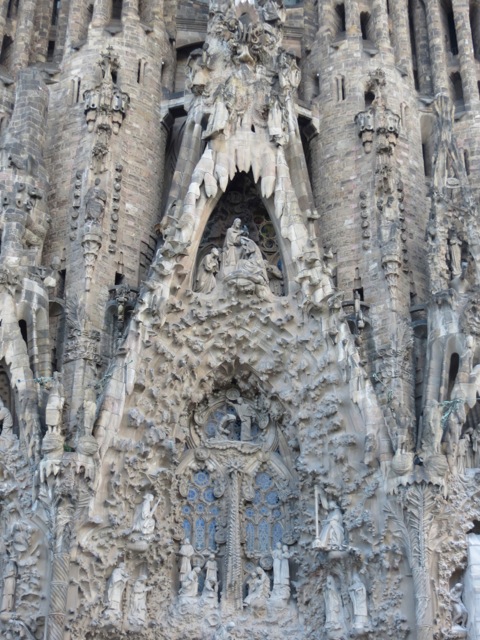 The tip of a low spire over a side entrance resembles a bird-occupied tree. 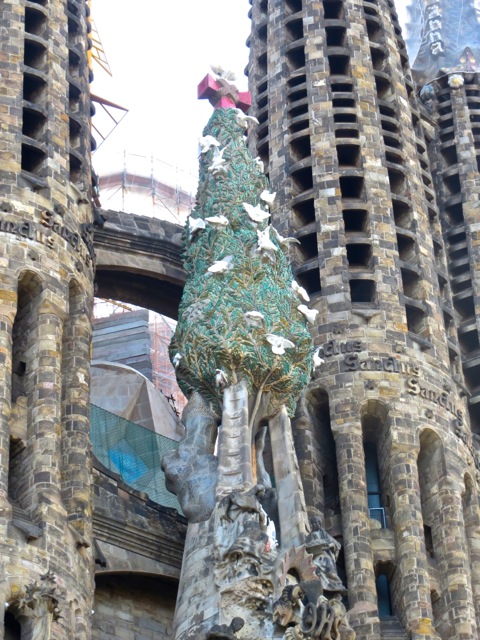 The low spires above the sides of the main hall are topped by colorful ornaments that resemble fruits. 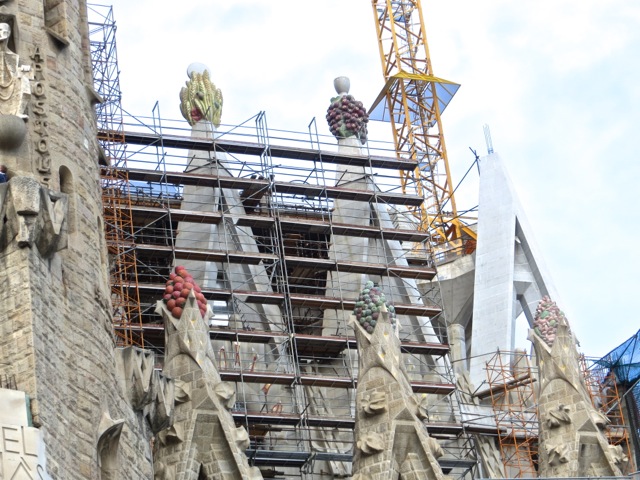 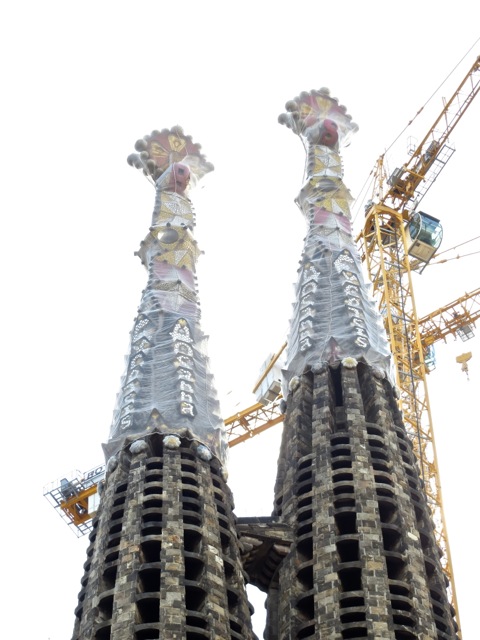 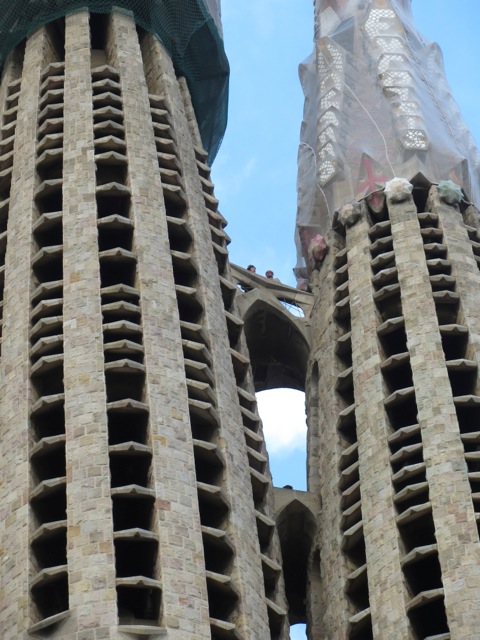 Looking at the basilica from this perspective, the construction of the massive central tower can be seen. 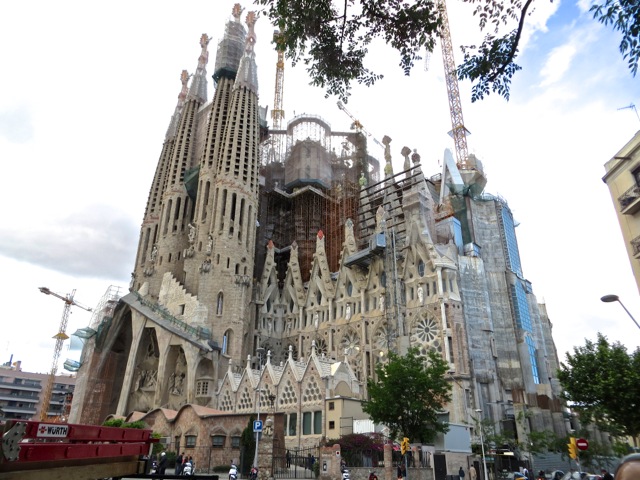 The central tower will be the dominant feature of the basilica when it is finished.  At 558 feet tall, it will be the tallest tower of any cathedral.  In this aerial picture, the partially constructed central tower is surrounded by scaffolding. 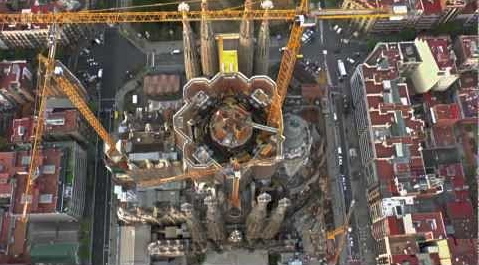 Gaudi’s original design drawings and plaster models were destroyed in 1936 during the Spanish Civil War.  Computer aided design software was used since 1970s in reconstructing his design using recovered chunks of the plaster models.  Many latter day architects devoted their careers to the building of this basilica.

Today, a small model of the basilica provides a complete view of Gaudi’s design.  This side view shows a side entrance topped by four spires, the only ones completed today.  The tallest central tower is shown to be surrounded by four spires and is topped by a gigantic four-armed cross, all to be built in the coming years. 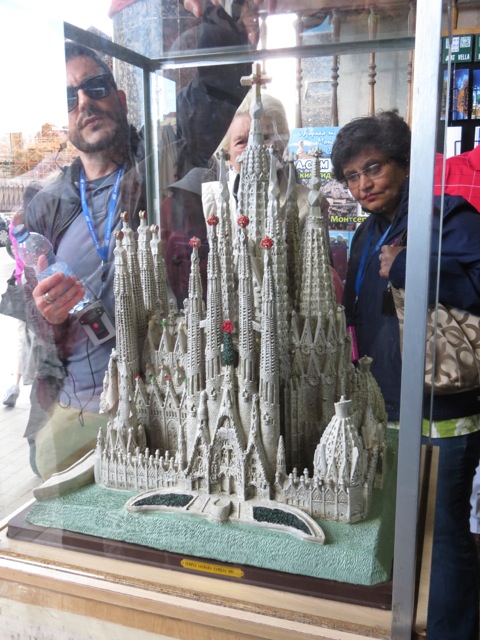 The design of the four armed cross on the central tower was also used in Gaudi’s other design, Casa Batllo the Dragon Building. 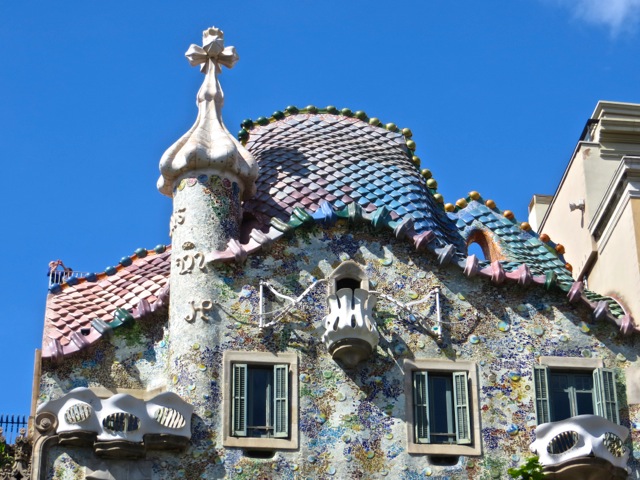 Another view of the model shows the front entrance with a massive canopy and four red-tipped spires.  This section of the basilica has begun to be built only a few years ago.  All together, there are 18 spires in the design of Sagrada Familia.  Only eight have been completed so far, and ten more spires have yet to be built. 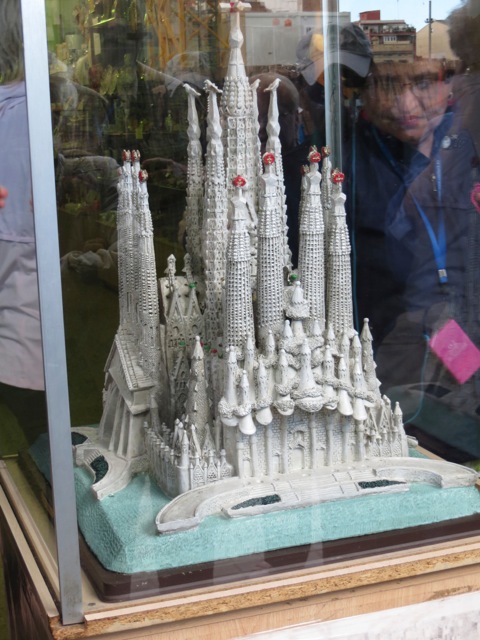 The interior of the basilica is basically completed and is a functioning church.  This photo shows how beautiful it is inside, and gives a glimpse of how gorgeous the completed church will be. 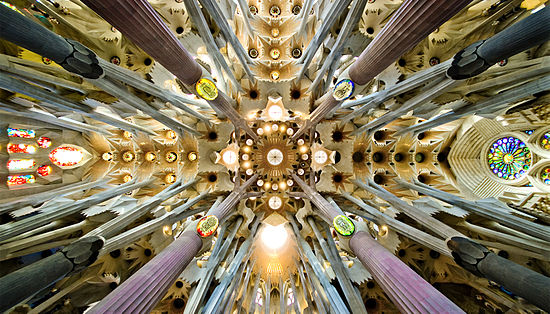 Looking at the Sagrada Familia, I was awe-struck by the audacity and majesty of this church.  I can empathize with the people in the Dark Ages when they viewed the gothic churches with high vaulted ceilings, stained glass windows and flying buttresses.  I can also understand why so much effort was invested into building these massive structures: to overwhelm and inspire the ordinary man into believing in the existence of an all-powerful God.  With this masterpiece, Gaudi earned his honorific as “God’s Architect”.

The following is a video of Sagrada Familia by the TV program 60 Minutes.